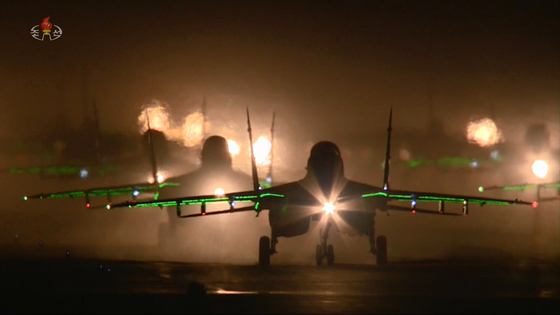 
North Korea appears to be preparing for another massive military event to commemorate its leader Kim Jong-un’s birthday and a major party congress in January, according to several sources familiar with the regime.

South Korean officials with access to intelligence on the regime said the country has been scrambling three to four fighter jets daily around an airport near Pyongyang in exercises aimed at an event in the near future.

These activities began immediately after the regime held an earlier nighttime military parade on Oct. 10, to celebrate the 75th anniversary of its ruling Workers’ Party.

That parade, an extravagant ceremony believed to have come at a substantial cost to the cash-strapped regime, was the venue for the regime to unveil the latest items in its growing arsenal of missiles and other formidable conventional weapons.

The festivities also included air shows conducted by fighter jets equipped with LED lights, not unlike the planes observed in the ongoing training.

Almost immediately after the parade, Kim launched an 80-day “battle” to mobilize the workforce in a last-ditch effort to eke out economic results in the remainder of the year leading up to the 8th Party Congress, slated for January.

The effects of this mass mobilization effort are not yet clear, but it is due to officially end on Dec. 30. State media reports on the campaign indicate it has been timed to wrap up right before the party convention is held in early January — along with what will likely be another parade.

In May 2016, when North Korea last held an all-member party congress, the event began three days after the end of a 70-day "battle."

A South Korean intelligence official also pointed out that the congress may have also been arranged to coincide with Kim Jong-un’s birthday on Jan. 8.

A military source in Seoul said the North’s military could use a parade to salute its supreme commander, who will turn 37 next year.

“North Korean troops were observed aligned in a mass formation that shaped the numbers ‘1.8’ to indicate Jan. 8 in training events held before the regime celebrated the 70th anniversary of the foundation of its Army in February 2018,” the source said.

The military parade held on Feb. 8 that year ultimately did not feature the 1.8 formation.

The birthdays of North Korea’s leaders are the most important holidays in the country. Unlike his grandfather's and father’s birthdays however, Kim Jong-un’s birthday has not yet been designated a public holiday, nor has it been marked as such in the country’s official calendars.

Experts believe that the massive events lined up for January hold dual purposes of shoring up internal support while relaying a message abroad.

“[Pyongyang] is likely to conduct a parade both to save face and as a form of a low-intensity provocation aimed at instilling in the new administration in Washington a necessity for talks,” said Shin Beom-chul, director of the Center for Diplomacy and Security at the South’s Korea Research Institute for National Strategy.