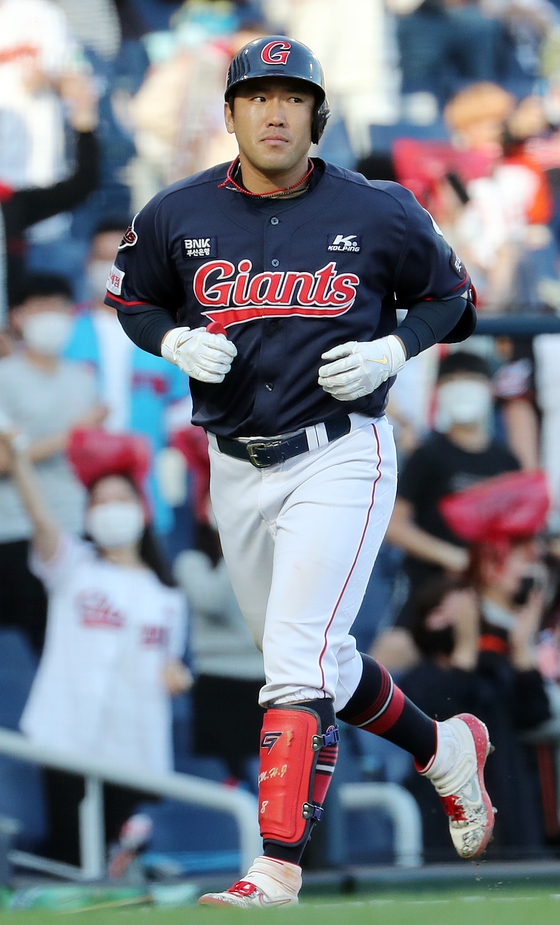 
Jeon Jun-woo of the Lotte Giants has been appointed as the club's new captain for the 2021 season.

The Giants announced Tuesday that Jeon will fulfill his role as the Giants’ new captain for the upcoming year. Up until the end of the 2020 season, outfielder Min Byung-hun was the Giants’ captain.

Since Giants' veteran Lee Dae-ho stepped down as captain, the players who have taken up the mantle have struggled to find success in their season. When Lee stepped down, Giants’ outfielder Son Ah-seop was named the Giants’ captain for the 2019 season.

But Son failed to finish the season with a batting average above .300 for the first time since 2007, and the club decided to change their captain to Min in the middle of the season.

Min stayed at the helm for the 2020 season, but he also struggled. Throughout 109 games, Min finished with a disappointing .233 batting average with only two home runs, 23 RBIs and 72 hits.

Looking at Jeon’s career, he’s a one-club man and has played 12 seasons with the Giants. The 2020 season was Jeon’s first after signing a free agent contract with the Giants, and he finished with a .279 batting average with 26 home runs, 157 hits and 95 runs throughout 143 games.

Although Jeon has failed to get his batting average above .300 for four straight seasons, he still managed to hit a good number of home runs, runs and RBIs.

As the new captain, Jeon is hoping to take the team higher in the 2021 season. Although their 2020 season was better than 2019, when the team finished dead last, this year was still quite a disappointment for the Sajik club.

Under new manager Her Mun-hoe, the Giants finished seventh in the regular season with 71 wins, a tie and 72 losses.

The Giants have not advanced to the postseason since the 2017 season and haven’t won the Korean Series since 1992.