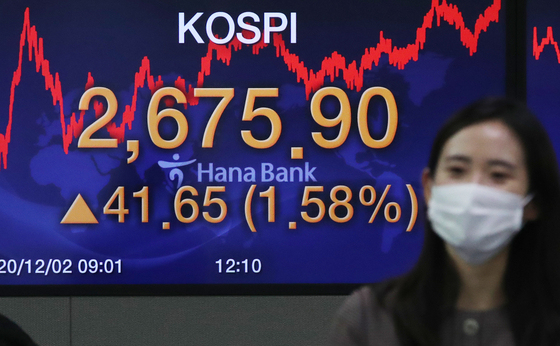 The closing figure for the Kospi is displayed in a dealing room at Hana Bank in Jung District, central Seoul, on Wednesday. Seoul’s main bourse closed at 2,675.9 after gaining 41.65 points, or up 1.58 percent from Tuesday.

Stocks hit another all-time high Wednesday for the second consecutive session on the back of optimism about Covid-19 vaccines and U.S. stimulus. The won sharply rose to a 29-month high against the dollar.

The benchmark index got off to a strong start, reaching as high as 2,677.26 on hopes of Covid-19 vaccines becoming available soon.

The European Medicines Agency said Tuesday it received applications for emergency approval of vaccines developed by Pfizer with BioNTech and Moderna.

A bipartisan group of U.S. lawmakers also proposed a stimulus worth $908 billion on Tuesday, keeping hopes of a large relief package alive.

"Memory chip supply is expected to decrease early next year, while demand is set to rise," Doh Hyun-woo, an analyst at NH Investment & Securities, said. "DRAM prices will start to rise from the second quarter next year."

The local currency closed at 1,100.8 won per dollar, down 5.4 won from the previous session's close.