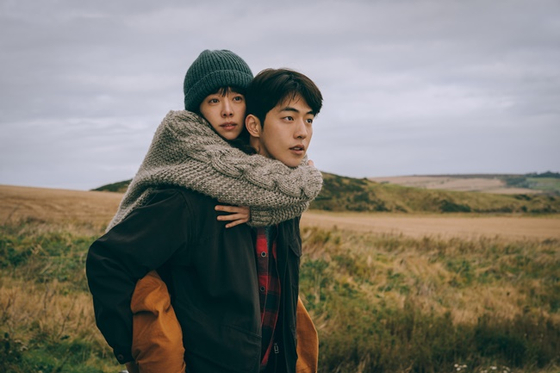 Adapted from the popular Japanese romantic film “Josee, The Tiger And The Fish” (2004), the Korean remake stars actors Han Ji-min and Nam Joo-hyuk and is directed by Kim Jong-kwan.

Singapore will be the first country to release the film, on Dec. 10, the same day as Korea, followed by Taiwan the following day. It will then hit screens in Vietnam on Dec. 18, Indonesia on Dec. 23 and Hong Kong on Dec. 31.

The original Japanese film is based on the 1985 Japanese short story of the same name by Seiko Tanabe. Isshin Inudo directed the Japanese film.

The story centers on a girl in a wheelchair nicknamed Josee and a boy named Young-seok and how they slowly fall in love.

Warner Bros Korea said the film has also been sold for release in other countries including Canada, the United States, China and Japan.

An official from K Movie Entertainment, a local company that helps sell film distribution rights overseas, told Ilgan Sports, an affiliate of the Korea JoongAng Daily, that “overseas distributors have been showing interest in ‘Josee’ since the early stage of its sales as it’s a well-made romance flick that’s coming out for the first time in many years.”

The company also added that the cast of two veteran actors who are also popular overseas contributed to such global releases.