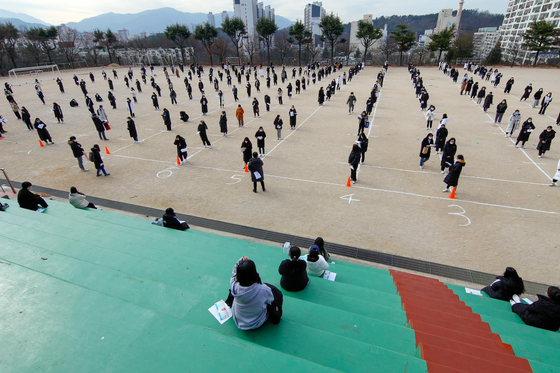 High school seniors gather at Junghwa Girls High School in Daegu Wednesday, a day before the College Scholastic Ability Test, to listen to instructions about the exam while practicing social distancing. [YONHAP]

The grueling eight-hour College Scholastic Ability Test (CSAT) will be held nationwide from Thursday morning following a two-week delay due to the Covid-19 outbreak.

Some 490,000 students have signed up for this year’s test, including coronavirus patients and seniors under quarantine, who will take the test in special locations.

With the recent uptick in coronavirus cases showing no signs of slowing down — and amid concerns that CSAT test-takers will run amok after completing a test they spent their entire teen years preparing for — some health experts are demanding the central government temporarily raise the national social distancing level to the highest Level 3.

Central health authorities Wednesday brushed off the need to immediately raise social distancing levels as a precaution, but said they were keeping close tabs on the situation to “quickly” raise the level if deemed necessary.

The country had been counting fewer than 500 cases daily from Saturday through Monday, temporarily raising hopes that infections were finally starting to drop. 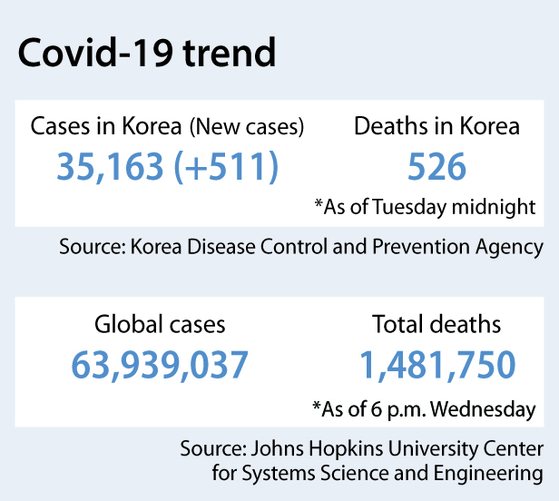 Of Tuesday’s total cases, 493 were domestic infections: 192 in Seoul, 143 in Gyeonggi, 31 in Busan, 26 in North Jeolla, 21 in Incheon, 16 in North Chungcheong, 12 in Gangwon, seven each in Sejong City and South Gyeongsang, six each in Ulsan and South Chungcheong, five in Daejeon, four each in Daegu and North Gyeongsang, two in Jeju Island and one in South Jeolla.

All of the country’s 17 major cities and provinces saw at least one new case.

Among 18 imported cases, four were from Mexico, three from Russia, two from Myanmar and one each from the Philippines, India, Indonesia, Poland, France, Germany, Hungary, Guatemala and Kenya.

No patients died Tuesday, leaving total deaths at 526, while 180 patients recovered, raising recoveries to 28,065. As of Tuesday at midnight, Korea had counted 35,163 coronavirus patients in all. The average number of new cases in a day over the past week was 470.

The Seoul Metropolitan Government in a press briefing Wednesday said it would carry out special inspections of the city’s noraebang, internet cafes and theaters over the coming days to check on their compliance with government health measures and social distancing, given that students who have completed the CSAT are likely spend downtime in them.

While presiding over a meeting of the Central Disaster and Safety Countermeasure Headquarters in Seoul Wednesday, Prime Minister Chung Sye-kyun mentioned there were currently around 70,000 people in quarantine due to possible exposure to the coronavirus, the highest number that the country has ever recorded in its months-long battle with the pandemic.

Chung said the coming weekend will be “a critical juncture” in determining whether the current spread dies down or grows, urging the public to fully cooperate with preventive guidelines from the government.