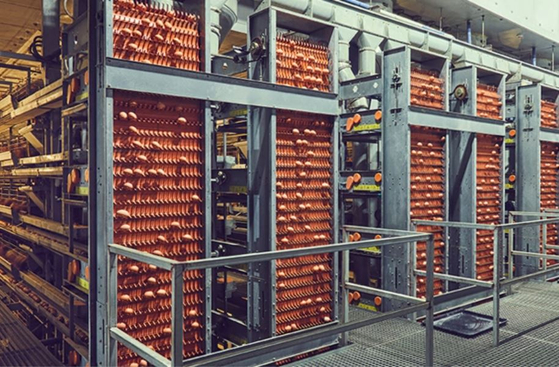 Market Kurly, an e-commerce operator known for fresh produce, has come under fire for selling eggs from chickens housed in the very worst conditions that the Korean rating system permits.

Starting last year, all eggs sold in Korea have to have a unique 10-digit code printed on them. The first four numbers of the code signify the date they were collected, and the following five are the production identification number. The final digit signifies the type of farm that the chicken that laid the egg was kept in.

Four numbers are available for the 10th digit: One, two, three and four. A one means that the chickens were free range while a two means they were raised in barns.

The numbers three and four mean that the chickens were raised in cages. While eggs with a number three come from chickens living in a 750-square-centimeter (116-square-inch) cage, chickens with the number four are locked in 500-square-centimeter cages. These small cages stacked together in rows are often called battery cages.

A 500-square-centimeter cage is smaller than a sheet of A4 paper. Chickens living in these conditions have absolutely no freedom of movement. Not only can they not move around, they can't even flap their wings or comfortably move from standing to sitting.

Market Kurly recently signed a contract with a poultry company that runs smart poultry farms. The eggs from those farms, which Market Kurly now sells, are marked with the number four. 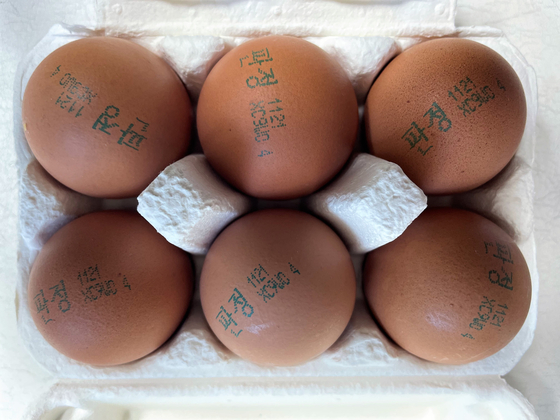 The eggs that Market Kurly recently started selling. The number four printed on the egg means that they are from chickens that are raised in a 500-square-centimeter (77-square-inch) cage. [CHON KWON-PIL]

Market Kurly described the eggs with the number four as eggs laid by chickens raised in a "stress-free environment.”

“We saw a lot of potential in smart farms that could actually produce safe eggs,” said a Market Kurly announcement on its official website. “[Smart poultry farms] thoroughly manage the temperature, humidity, amount of sunshine and carbon dioxide, as well as the concentration of ammonia through super computers.”

“There’s no need to use additional insecticides or antibiotics as chickens there are healthy in a stress-free environment without suffering diseases."

Animal rights organizations and Market Kurly customers criticized the announcement, saying that selling eggs with the number four contradicts the brand image of the e-commerce operator that has been strongly calling for eco-friendly and organic farming products.

“Chickens in the number four environment get highly stressed as none of their instinctive behaviors — like shaking their wings and dust baths — are allowed there,” said the animal rights group Korean Animal Welfare Association (KAWA).

In 2012, the European Union actually banned the use of battery cages when raising egg-laying hens. Many global companies including McDonald’s and Walmart have also pledged not to use eggs from caged chickens as part of the ongoing push to improve animal welfare.

The World Organisation for Animal Health (OIE) defines the term "animal welfare" as “how an animal is coping with the conditions in which it lives. An animal is in a good state of welfare if (as indicated by scientific evidence) it is healthy, comfortable, well nourished, safe, able to express innate behavior, and if it is not suffering from unpleasant states such as pain, fear and distress."

Among local companies, Pulmuone joined the cage-free movement in 2018 and Starbucks Korea a year later.

In response to the outcry, Market Kurly said that roughly 75 percent of eggs that it has been selling are from chickens that are raised in number one and two conditions.

“We wanted to explain the reason why we are selling eggs with number four that are raised in smart farms, but it seems like people think we are promoting them,” Market Kurly said. “We’ve been trying hard to realize cage-free production, but we can’t control it as more than 10,000 food products are made with eggs.”