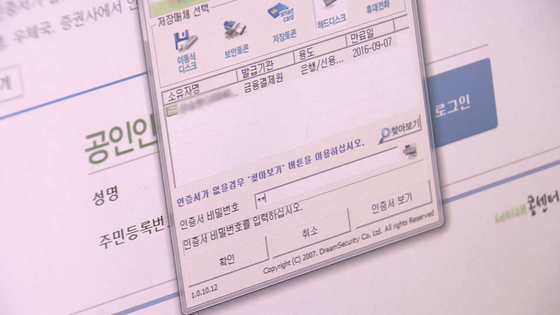 The old certificate authentication system, which will lose its official status on Dec. 10, is displayed on a computer monitor. [SCREEN CAPTURE]


Korea’s online certificate authentication system, which has been used for decades for government websites and online banking, will lose its official status next week after a bill aimed at scaling back the use of the system was passed by the legislature early this year.

When the law takes effect on Dec. 10, it will pave the way for people to use authentication certificates issued by private companies such as banks and tech companies for payments and even doing their taxes.

The JoongAng Ilbo, an affiliate of the Korea JoongAng Daily, has summarized the changes in a Q&A format.


Q. Can I still use my Yessign accredited electronic certificate after Dec. 10?


What will change once private certificates are introduced?

More options will be made available to customers. The identification process will also become simpler. In the Yessign system, users needed to identify themselves through physical channels, but now they can do it online or through a mobile device. Certificate holders can also use their bio-data or simpler pin numbers instead of the complicated 10-character password needed to use the government’s authentication system.


Do I still have to download all the support programs?

No. If you use a private certificate, you do not have to download supporting programs like Active X and vaccine software, which were needed in the previous system. Some certificates recently introduced can be downloaded directly on your mobile device. It only takes about a minute to sign up. The certificates can also be used for a long period of time — around two to three years.


Among private certificates, which one is the most popular?

The PASS certificate by an alliance that's among Korea’s three mobile carriers got the first crack at the market. The PASS app was launched last April and has been issued more than 10 million times as of November. Users can choose between a six-digit PIN number or their biometric information, like fingerprints, to use the authentication system. Certificates can be used for up to three years for free.

But be aware that there are additional services that could charge payments. The Korea Communications Commission requested service providers not trouble customers with paid services in case people get confused and spend money unknowingly.

“If private companies start to charge customers payments to use their electronic certificate system, it could be another entry barrier that ostracizes the low-income class [from society],” said Choi Kyoung-jin, a law professor at Gachon University. “It’s important to enhance convenience through private certificates, but the government needs to come up with ways to balance that out with accessibility and safety.”


What other electronic certificates are out there?

Kakao Pay’s electronic authentication system uses blockchain technology to prevent forgery. Holders of Kakao certificates do not have to download additional software and can log into their certificates through the KakaoTalk messenger service. Money transfer app Toss also launched a mobile certification service in 2018, which was used by more than 17 million people as of October. Customers can purchase goods through Naver Pay and receive electronic receipts through Naver’s authentication service. NHN Payco, a payment gateway, launched a service in September. Users receive alerts through their smartphones when an electronic signature or ID verification is necessary. Users can log in with a pattern password or their thumbprints.


Which electronic certificate can we use to do taxes?

The government plans to introduce more private certificates to be used for public functions like paying taxes. It selected five candidates — Kakao, KB Kookmin Bank, NHN Payco, PASS and value-added service provider NICE Information & Telecommunication — which will be the first to be used in the year-end tax adjustments process this year. The Korea Internet Security Agency and the Public Administration and Security will visit the offices of the selected companies to check on security. Of course, people can use the Yessign certificate to do taxes this year.


Can we trust them?