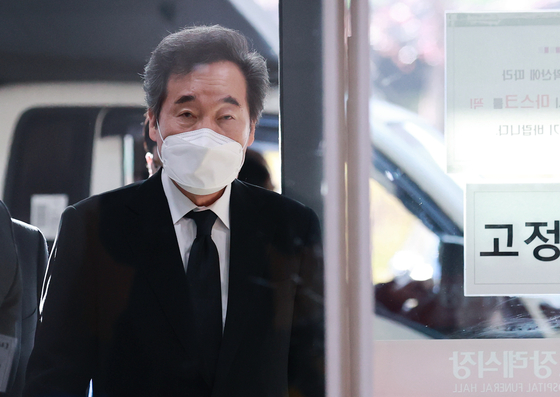 Chairman Lee Nak-yon of the ruling Democratic Party enters a funeral facility of a hospital in Seoul after his longtime aide was found dead in an apparent suicide amid the prosecution's investigation. [YONHAP]

According to the police, the 54-year-old deputy director of the office of Democratic Party (DP) Chairman Lee was found dead near the Seoul Central District Court in Seocho-dong, southern Seoul, on Thursday night. The aide to the DP chairman, also surnamed Lee, was one of the suspects in the prosecution’s probe into suspected legal violations committed by Lee Nak-yon’s campaign during the April general elections.

The Seoul Metropolitan Election Commission filed a criminal complaint to the prosecution last month to investigate the case.

According to the police, Lee attended the second round of questioning at the Seoul Central District Prosecutors’ Office on Wednesday. The questioning went into recess and he left the building around 6:30 p.m. for dinner. He was supposed to return to the prosecution and resume the session, but he never returned, the police said.

The police said he called his wife around 6:40 p.m. and said, “I am sorry.” After his family reported him missing later on Wednesday night, the police started a search operation. His body was found at around 9:15 p.m. on Thursday night near the Seoul Central District Court.

The Seoul Central District Prosecutors’ Office and the court are located next to each other, about 500 meters (0.3 miles) away.

“We are extremely sorry that this happened, and we express our condolences to the family,” the Seoul Central District Prosecutors’ Office said in a statement.

Prosecutor General Yoon Seok-youl on Friday ordered an internal investigation into what had happened during the probe.

In October, DP Chairman Lee was accused of and later admitted to having received illegal financial assistance from an affiliate of Optimus. Between February and May, the company had paid monthly rental fees for a digital fax machine in Lee’s office.

Lee admitted to the practice, but said it was an administrative mistake, blaming his campaign staff. Lee said the printer was borrowed through a friend of a volunteer ahead of the April 15 general election campaign, and his office became aware of its link to Optimus only after the media reported it.

The National Election Commission looked into the allegation that Lee had violated the Political Fund Act by allowing the Optimus affiliate to pay the printer rental fee and formally asked the prosecution to investigate the case.

Chairman Lee's late confidant Lee was one of his closest aides for more than two decades. In 2014, he was convicted of having violated election law during the local election where Chairman Lee won a victory to become South Jeolla governor. After he served a 14-month prison term for the conviction in 2016, then Governor Lee Nak-yon named him special advisor for political affairs.

Sources in the prosecution said prosecutors had planned to expand the current probe to find out if Chairman Lee was connected to Optimus directly. Now that the aide has died, it remains to be seen if the prosecution will continue the probe.

“I cannot find a way to suppress my sorrow,” Rep. Oh Young-hun, chief of staff to Lee Nak-yon, quoted the chairman as saying on Friday.

Oh said the late Lee had served as deputy head of Chairman Lee’s office since September and submitted faithfully to the prosecution’s probe. “We offer our deepest condolences to his family,” Oh said.