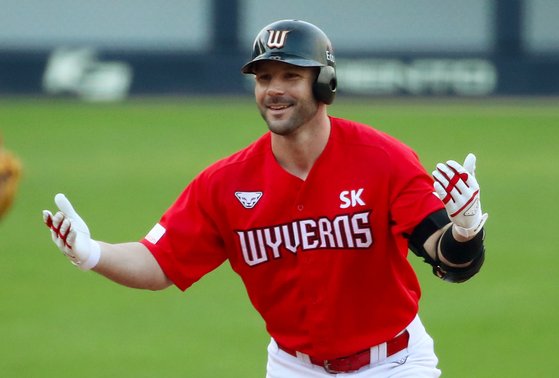 
SK Wyverns slugger Jamie Romak has been awarded the James "Tip" O'Neill Award, the top honor that the Canadian Baseball Hall of Fame has to offer.

Romak, who joined the Wyverns in 2017 and has already re-signed for the 2021 season, was recognized both for his individual statistics and for his contribution to the Wyverns over the last four seasons. The award recognizes one player each year who has "excelled in individual achievement and team contribution while adhering to baseball’s highest ideals."

"Jamie Romak has developed into one of the most feared power hitters in the Korean Baseball Organization,” Scott Crawford, the Canadian Baseball Hall of Fame’s director of operations, was quoted as saying on the organization's website. "Those numbers were the best by any Canadian professional player this year. Most importantly, Jamie is highly respected by his peers and teammates and has been a great ambassador of the game for our country."

“It’s an absolute honor to receive this award and have my name engraved beside so many great players — many of whom I grew up idolizing,” Romak was quoted as saying. “I am motivated by the generations of Canadian ball players before me that have made their mark and done so with dignity."

Romak was chosen for the award over Canadian major leaguers including Tyler O’Neill of the St. Louis Cardinals, Joey Votto of the Cincinnati Reds and Jordan Romano of the Toronto Blue Jays.