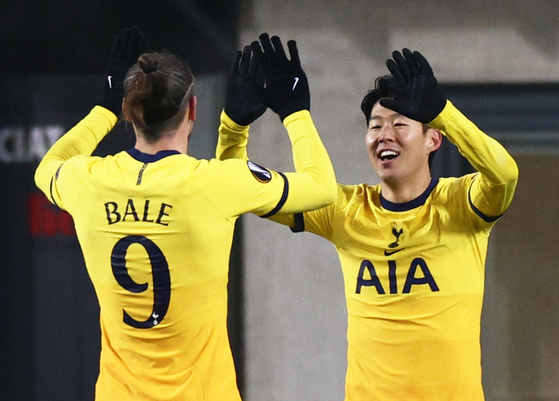 
Son Heung-min picked up his 12th goal of the season across all competitions on Thursday as Tottenham Hotspur battled Austrian side LASK to a 3-3 draw to earn a spot in the Europa League knockout round.

Playing without Harry Kane, Spurs got off to a slow start at Linzer Stadion in Linz, Austria, falling behind 1-0 in the 42nd minute after a goal from LASK’s Peter Michorl.

The opportunity to equalize came just before halftime, when LASK’s Andres Andrade conceded a penalty with a ball to hand inside the box. Gareth Bale stepped up to the spot and slotted the ball home to take the score to 1-1 going into the break.

At the top of the second half it was Son’s time to shine. Picking up the ball from Tanguy Ndombele, Son pulled clear of the defense to put the ball past LASK goalkeeper Alexander Schlager to take the lead at 2-1.

After Son’s goal, Spurs lost some of their second half fire, with the Korean striker and Bale failing to connect to extend the lead.

LASK came back in the eighth minute to tie the score at 2-2 with a goal from Johannes Eggestein. Spurs responded just two minutes later when Dele Alli, who came on as a substitute for Son, scored another penalty to give Spurs the 3-2 lead in the dying seconds of the game.

But LASK wasn’t finished. In the third minute of injury time, Mamoudou Karamoko came through with the come-from-behind goal to tie the score at 3-3 ahead of the final whistle.

With the draw, Spurs have secured a spot in the Europa League Round of 32. It wasn’t the big victory that Spurs’ fans will have hoped for though, with the London side only just managing to get the job done against an Austrian team that created far more opportunities.

Tottenham will hope for more as they take on local rivals Arsenal this weekend. On paper this should be an easy game for Spurs — Son alone has scored nine goals in the Premier League so far this season, only one less than the entire Arsenal squad’s 10 — but anything could happen in the London Derby.