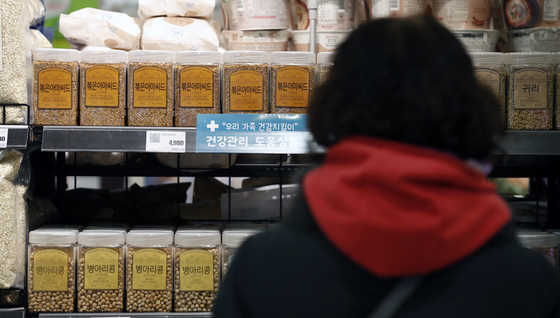 Beans on display at a discount mart in Seoul in November. Prices of beans were up due to the heavy rainfall in summer. [NEWS1]

According to the Fair Trade Commission (FTC) on Sunday, the companies participated in a price-fixing scheme that lasted from March 2006 through January 2018, regarding bidding for work commissioned by Korea Agro-Fisheries & Food Trade, a state-run corporation.

The job was to transport various imported agricultural products, ranging from sesame seeds to potatoes, from the ports in Busan to storage facilities throughout the country.

At the time the scheme started, fierce competition among logistics companies had pushed the price for the transportation program down by 71.4 percent as of January 2006. The FTC claimed that the companies decided to collude on the bidding price to restore their profit margins, resulting in a March 2006 bid in which they were able to drive the winning bid up to 98.4 percent of the earlier price.

The companies agreed to take turns during the bidding process in order to fix the price that would be offered to the state-run firm. The 12 companies were found to have colluded on 60 occasions.

Twelve companies were found to have participated in the collusion scheme. Nine of them were accused of more egregious violations, and their cases were turned over to the prosecutors’ office for possible additional action.

One of the companies, Dongbu, was not fined because it entered a court-ordered restructuring in 2015 that ended the restructuring program at the end of 2016. The investigation by the FTC started soon after.

An earlier ruling by the Supreme Court held that companies that are either in the process of a court receivership or just ended the program are exempt from any penalty of an antitrust investigation.

“For 12 years a price-fixing scheme has been maintained secretly on necessary goods that were stored for the purpose of stable supply,” said Moon Jae-ho, head of the FTC’s antimonopoly division. “Considering that most of the leading logistics companies have been included in the investigation, [the latest penalty] will likely prevent future collusion.”