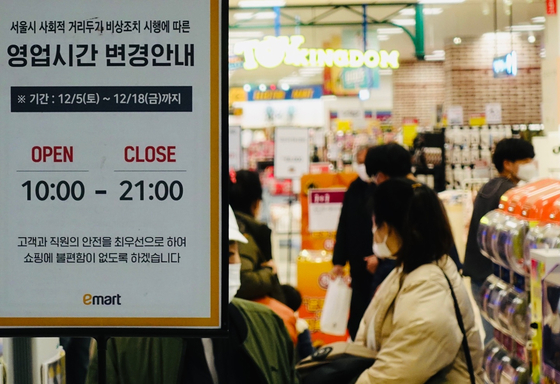 A sign at an Emart store in central Seoul says the store will change operating hours to close at 9 p.m. from Saturday. [YONHAP]


Retailers and other small businesses are winding up an annus horribilis as Covid-19 shuts down the usual chances of cashing in at year's end.

For Korea’s restaurants and bars, December to January should be a peak season as colleagues and friends get together to celebrate the year’s end. It’s also the season of Christmas and a time when high school seniors go wild after taking the national college entrance exam.

That seasonal excitement is being drowned by social distancing regulations that are about to get rougher. The government announced Sunday it will raise restrictions to Level 2.5 in the capital area for three weeks from Tuesday.

Restaurants and cafes have been feeling the pinch since Level 2 measures went into effect Nov. 24, forcing them to close at 9 p.m.

“Four high-end tuna restaurants closed their doors in Yeouido already, and there’s a score of businesses nearby that have months of delayed rent and staff payments,” said Mr. Park, a 54-year-old owner of a Korean restaurant in Yeouido, western Seoul.

“The year’s end is when revenues typically reach a peak but we can’t expect that this year," he continued. "So we’re pretty much done for the year.”

Under Level 2 distancing, cafes in the Seoul metropolitan area were affected by the most drastic measure since the pandemic’s spread: Customers were banned from sitting inside and only allowed to order take-out or via delivery services.

From Saturday, restrictions were tightened once again as the government expanded the scope of affected businesses to discount chains, department stores, theaters, internet cafes, beauty salons and theme parks. The Level 2.5 measures announced Sunday force a complete shutdown of karaoke and indoor sports facilities including gyms.

This was the first time discount chains like Emart and Lotte Mart saw operating hour restrictions since the pandemic’s beginning. The chains were forced to close at 9 p.m. Industry sources estimate that closing one or two hours earlier can cut major supermarket brands' revenues by 10 percent.

“We will try our best to reduce inconvenience by enforcing online orders and delivery," said a discount chain source. "But when it comes to supermarket customers like married couples that both work or elderly people, there are limits in meeting their demands purely online.”

In the 2021 budget plan announced last week, the government proposed a third round of emergency relief grants of 3 trillion won ($2.8 billion). Local media reported Sunday that these grants will be concentrated on small-business owners hurt by the pandemic, citing government sources.

“We concluded that special support is inevitable for the damaged class,” said Finance Minister Hong Nam-ki in an interview with YTN on Dec. 2.

“It took around 3 trillion won to help small businesses [in the fourth supplementary budget]. That was referenced in deciding the new budget of 3 trillion won.”