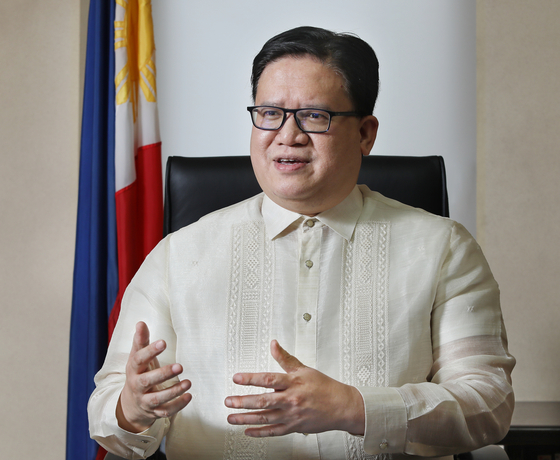 Christian De Jesus, charge d’affaires of the Embassy of the Philippines, speaks to the Korea JoongAng Daily at the embassy in Seoul on Nov. 18. [PARK SANG-MOON]

Philippines were first in Asia to fight alongside South 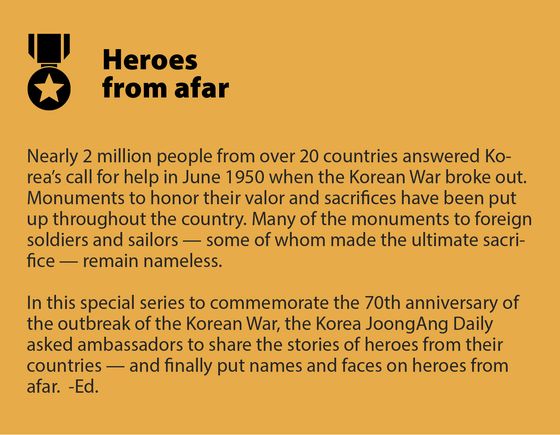 Pitch dark was the night of April 22, 1951, that Pvt. Segundino Atrero and his fellow Filipino soldiers were ordered to fire at anything that moved.

“Since it was so dark I [had] to rely on the sound and movements to fire at the target,” Pvt. Atrero wrote to the Korea JoongAng Daily on Oct. 17. “In the morning I saw piles of dead bodies just a few meters from my foxhole, and in front of my company front — more dead bodies.”

Around 900 Filipinos with the 10th Battalion Combat Team (BCT) were stationed along a three-mile defense line north of Yeoncheon County, Gyeonggi, in the Battle of Yuldong, from April 22 to 23, 1951.

They were defending one of the northernmost defensive lines then held by the United Nations forces, while the spring offensives from China and North Korea in the Korean War (1950-1953) were escalating. The Chinese forces were known for attacking in the dead of night.

“Their aim was to end the war with a decisive communist victory,” recalled Maj. Maximo P. Young, 98, in an emailed response to the Korea JoongAng Daily on Oct. 9. “By 6 a.m. of April 23, the 10th BCT was only one of two UNC units on the Western Front not overrun or wiped out by the tremendous Chinese assault. In standing firm at Yuldong, the grossly outnumbered Filipinos helped prevent the Communists from advancing further.”

Many Filipino soldiers died during the battle, including commanders Conrado D. Yap and Jose Artiaga. Capt. Yap was ordered to withdraw at dawn on April 23, but he defied this order to rescue the platoon of Lt. Artiaga, which was trapped between enemy forces. 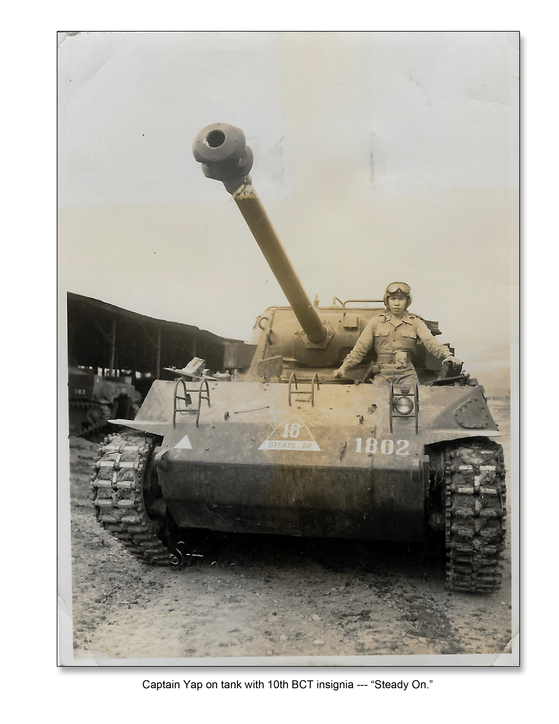 “Through intense enemy mortar and machine gun fire coming from all directions, they regained the hill,” reads the citation from the Medal for Valor awarded to Yap. “[Capt. Yap] recovered the bodies of Lt. Artiaga and two other men. They were able to rescue the members of the trapped platoon.”

Yap was shot and killed shortly after as he went for another charge to recover the body of a corporal. He was posthumously awarded the Philippines’ Medal for Valor, the U.S. Distinguished Service Cross and Korea’s First Class Taegeuk Cordon of the Order of Military Merit. The 10th BCT received the U.S. Gallantry Award for their valor during the Battle of Yuldong.

Throughout the course of the war, a total of 7,420 Filipino soldiers served, of whom 116 were killed in action, 299 were wounded, 57 went missing and 41 were captured and repatriated, according to the Embassy of the Philippines in Korea. The nation's veterans included former President Fidel V. Ramos, who was then a fresh graduate of the U.S. Military Academy at West Point. Former Senator Benigno Aquino, Jr., had also covered the war as a journalist.

“It is a little-known fact for many that, when the Korean War broke out on June 25, 1950, the Philippines was the first Asian country to send contingent forces to aid South Korea,” said Christian De Jesus, charge d’affaires of the Embassy of the Philippines in Korea.

The Filipinos had experienced warfare on their soil just a few years back, during World War II.

“As a country that fought to regain the freedom of its people, and with memories of the Second World War fresh in their hearts and heads, our leaders then knew that it was incumbent upon us to see that the same values our heroes died for during the war were not trampled upon elsewhere,” De Jesus said.

The first of the Filipino soldiers, numbering around 1,400, arrived in the port of Busan on Sept. 19, 1950, according to the embassy.

Many of them were in their teens, including Cpl. Mauro C. Lino, who was just 18 when he arrived in Korea in September 1950.

“I was [a] little nervous when we landed the first time to Korea, but when we moved to the battleground, it became more intense and frightening,” Lino wrote to the Korea JoongAng Daily on Oct. 6. “I heard nonstop firing of guns, artilleries and saw a lot of enemies and cold bodies, too.” 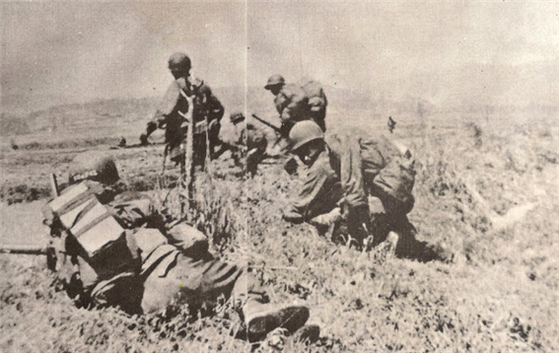 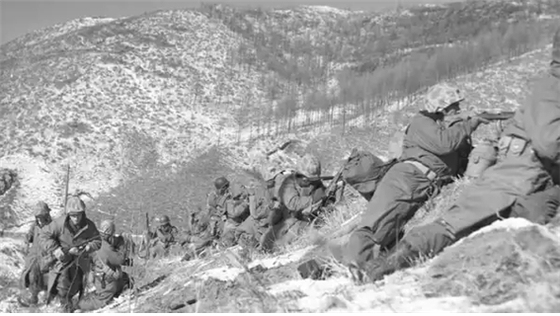 Apart from the North Korean and Chinese forces, the Filipino veterans had another enemy to fight.

“Having come from a country where we never knew winter, that was the first time that we were exposed to that kind of weather,” Young said. “We pitched our tents on an open field and many of us woke up with water snakes in our tents. The snakes apparently fled the cold and sought warmth beside our bodies.”

Frostbite was common in the subzero temperatures.

“Many soldiers at that time suffered frostbite, as we would be hiding or taking cover inside trenches that are filled with drainage or snow-melted water, almost ankle-deep,” Young said. “When our soldiers would remove their socks to sleep at night, due to the frostbite the skin would also peel off.”

But being surrounded by snow for the first time in their lives, the soldiers also found occasions to celebrate.

“On Nov. 22, 1950, it was my birthday and my first-ever experience to see snow,” said Lino. “During our meal, we got fruit cocktails and added some snow on it. This is what we call: Halo halo in the Philippines. A mix of different fruits, milk and shaved ice."

Atrero remembered enjoying the occasional moments of respite from the war.

“At night when it is safe we [would] build small campfires, gather around and talk about things,” Atrero recalled.

These moments were short-lived, however, and the soldiers were soon sent back to the frontlines.

“The Battle of Miudong was the first battle fought, and won, by Filipino soldiers on foreign soil,” Maj. Young said. “We moved out towards Singye in a long column early in the morning of Nov. 11, 1950. We were then hit by [a] heavy fusillade of fire power from North Korean soldiers dug in along the forward slopes of hills on our right flank.”

Young’s vision of the enemy was compromised at one point during the battle, whilst he was commanding five M24 Chafee tanks.

“I could not see the enemy positions from inside the tank. My gunner was yelling at me to tell him where to aim the tank’s 75-mm cannon,” he said. “There was only one thing to do. I flung open the turret hatch, clambered out of the turret, braced my feet against the metal hull and fired the big .50 caliber machine gun at the enemy positions. The machine gun had no gun shield and I was fully exposed to enemy fire that continued to strike my tank.”

The Filipino forces defeated the enemy troops by Nov. 12, and Maj. Young was awarded the Gold Cross Medal from the Philippines for his heroism. 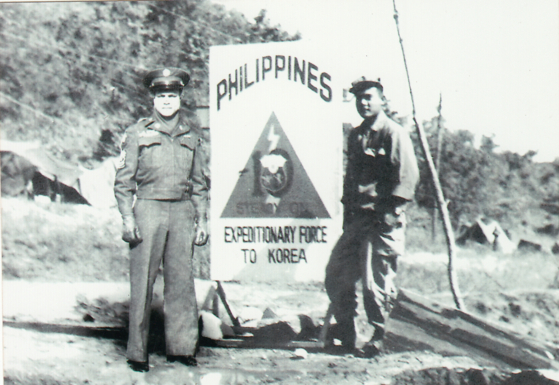 The war concluded with an armistice in July 1953, and the last of the Filipino troops departed in May 1955. But Korea had, for some of them, become more than just a battleground.


“I consider it my second country,” wrote 2nd Lt. Jaime P. Cardano, who served in Korea from Oct. 30, 1950, to Oct. 1, 1951. “My first revisit to Korea was way back [in the] mid-1980s, together with other Korean War veterans. Seeing Korea now makes me feel proud, it has risen up from the way it was during the war. Indeed, our sacrifices in fighting for freedom and democracy [have] not gone to waste.”

Cpl. Lino, who ended up celebrating his birthday twice during the war, never managed to return but kept himself updated on Korea nevertheless.

“It was only on television that I watched Korea as one of the poorest countries in the world become one of the richest and greatest countries ever,” said Lino. “I am really proud of myself that I fought and gave the freedom that South Koreans are well deserving of.”

Today, just 144 veterans survive in the Philippines, but their stories live on as they are retold by their descendants.

“My father [could] still recall the words of Col. Alexander Lancaster G-3, U.S. 8th Army, who said then, ‘Give me the Filipino soldier of the 10th BCT and I will fight anywhere above the 38th parallel,’” Rosalyn Flores, the daughter of Filipino veteran Valentin Flores, wrote to the Korea JoongAng Daily on Oct. 11. 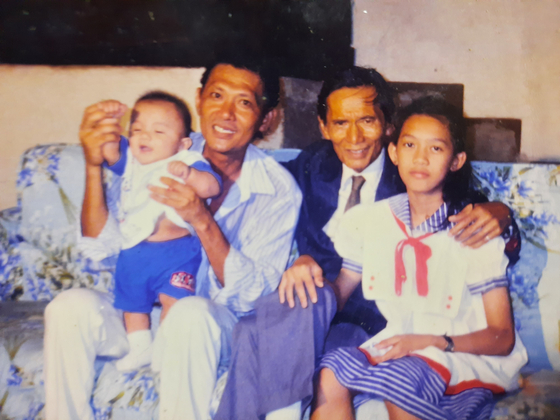 Valentin Flores, Filipino veteran of the Korean War, second from right, with his family in this photo taken before his death. [ROSALYN FLORES]

“Until today, the Philippines, through the Philippine Veterans Affairs Office, celebrates this memorial day with a simple wreath-laying ceremony at the Korean War Memorial at the Libingan ng mga Bayani [Heroes’ Cemetery],” said De Jesus. “War veterans, together with their families, are present to witness the ceremony and take part in the celebration.”

With every veteran’s experience being different, it’s hard for them to summarize their experience into a handful of words. But there may be one feeling that they all cherish alike. 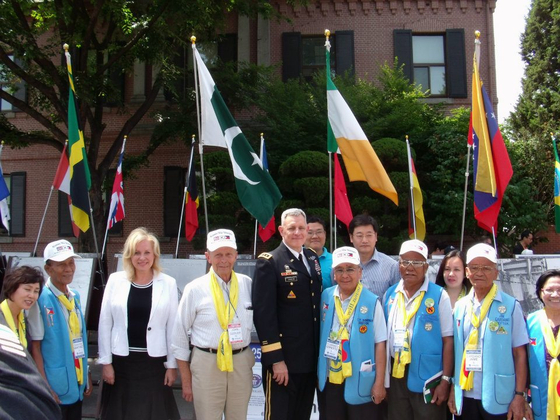 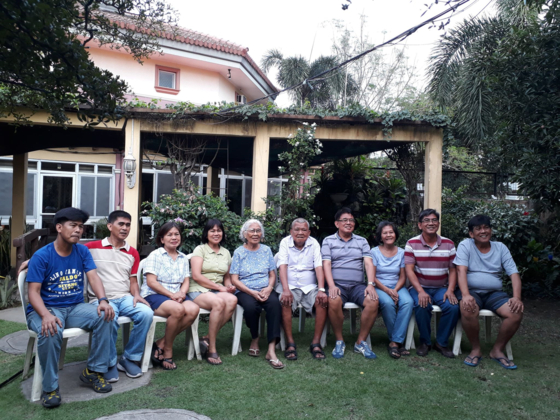 Mauro C. Lino, who served in the Korean War, with his family. [MAURO C. LINO] 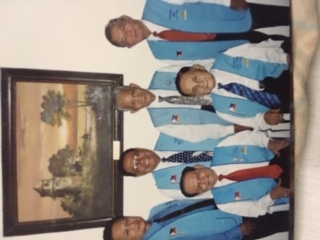 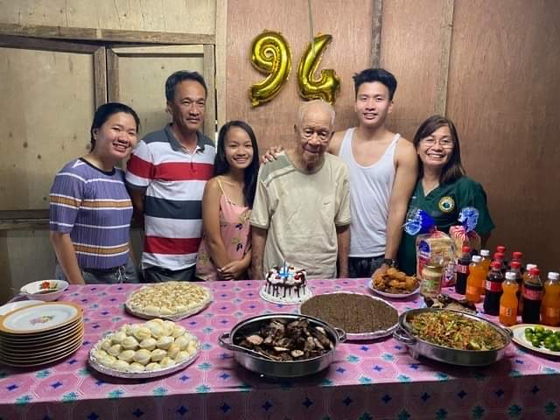 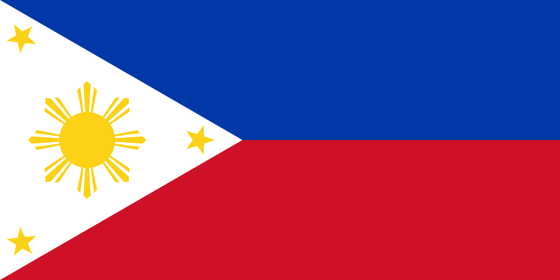