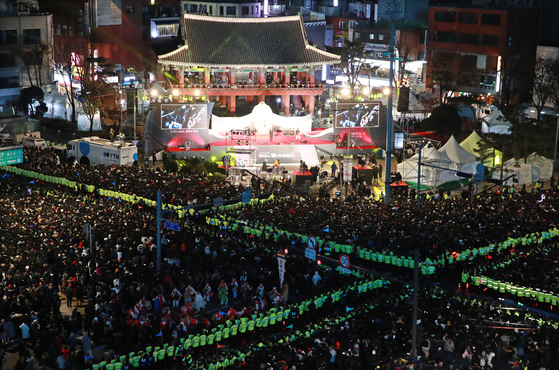 Crowds gather in front of the Bosingak belfry in central Seoul on Dec. 31, 2019, for the annual bell-ringing ceremony to usher in the new year. [YONHAP]


The Seoul city government announced Sunday that the traditional bell-ringing ceremony on New Year's Eve will be canceled due to the Covid-19 pandemic.

“It was a decision reached after considering the recent spike in numbers of Covid-19 infections in the city,” an official from the Seoul Metropolitan Government told Yonhap News on Sunday.

The daily Covid-19 infections in Seoul reached 291 on Thursday, a record high. The city added 231 cases Friday and 254 on Saturday.

It will be the first time the Bosingak belfry ceremony has been canceled since the tradition began in 1953.

Every year, the mayor of Seoul, other government officials and specially invited representatives of the public ring the bell to herald the new year. Last year, the bell ringers included Pengsoo (the popular EBS penguin character), gold medalist in bowling at the 100th National Sports Festival Shin Da-eun and IT expert Han Byung-joon.

The bell was struck 33 times and crowds gathered around the belfry outside Jonggak Station in central Seoul to celebrate the occasion. The bell-ringing ceremony was televised on all major channels, Seoul's equivalent of dropping the ball at midnight in New York's Times Square.

The city government said a pre-recorded ringing of the bell would be streamed this New Year’s Eve.

The Bosingak bell dates to the Joseon Dynasty (1392-1910), when it was used to toll the hours in Seoul. It stood near today’s entrance to the Insa-dong area in 1396. The bell tolled 33 times at four o'clock in the morning and 28 times at 10 o'clock at night to announce the opening and closing of the main gates to the capital city, which was then surrounded by high walls.

The 33 tolls are symbolic of the 33 heavens of Buddhism, and the sounds are supposed to carry through the 33 heavens to bring national prosperity and happiness.

The bell was also rung in times of fires or other emergencies.

The original bell was moved to the National Museum of Korea after cracks were discovered. A replica cast in 1985 is now being used.