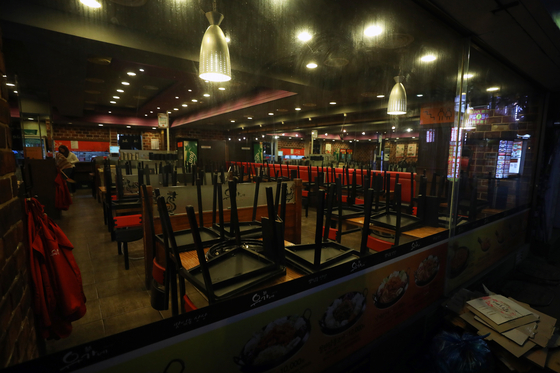 An employee at a restaurant in Myeong-dong, central Seoul, prepares to shut down before 9 p.m. on Saturday as Seoul’s city government applied stricter social distancing measures from Saturday. Health authorities Sunday announced that the social distancing level for the Seoul metropolitan area would be raised to Level 2.5 as daily coronavirus cases surpassed 600 for the second time in nine months. [NEWS1]

Health authorities Sunday announced that the social distancing level for the Seoul metropolitan area will be raised by another notch to Level 2.5, while the rest of the nation's will also be elevated to Level 2.

The new Level 2.5 rules will be applied to Seoul, Incheon and Gyeonggi — together called the Seoul metropolitan area or the greater Seoul area — for three weeks starting Tuesday to Dec. 28, officials in the Central Disaster and Safety Countermeasure Headquarters said in a press briefing.

Level 2.5 is the second-highest level in the five-tier social distancing system. It’s the first time the Korean central government has imposed Level 2.5 measures on a region since a three-tier scheme was replaced by the current five-tier scheme in early November.

Cities outside the greater Seoul area will be subject to looser Level 2 restrictions during the same period, the headquarters said, though each local government office will have some discretion to lower their levels after consultation with the central government if they wish.

The headquarters said its goal was to reduce daily infections in the Seoul metropolitan area to 150 to 200 a day. Greater Seoul saw 470 new cases on Saturday alone, data from the Korea Disease Control and Prevention Agency (KDCA) revealed.

Under Level 2.5, indoor gyms, billiard halls and noraebang (singing rooms) will have to close. Clubs and bars where customers dance and table-hop were forced to close under Level 2, and they will remain closed under Level 2.5 as well.

Restrictions on coffee shops and restaurants will be the same as Level 2 — cafes are only allowed to provide take-out services throughout the entire day, while restaurants can offer normal indoor services up until 9 p.m., after which only take-out will be allowed.

Any gatherings of 50 people or more will be banned, which means weddings have to cap their guests at 49.

Hagwon (private cram schools) will specially be subject to Level 3 restrictions, meaning they can’t gather for in-person lessons at all. Those that are currently offering lessons for high school seniors preparing for interviews or written tests for college admissions next spring, however, will be subject to Level 2.5 restrictions, which means they can provide in-person lessons only until 9 p.m. The same exemption was offered to vocational training centers. 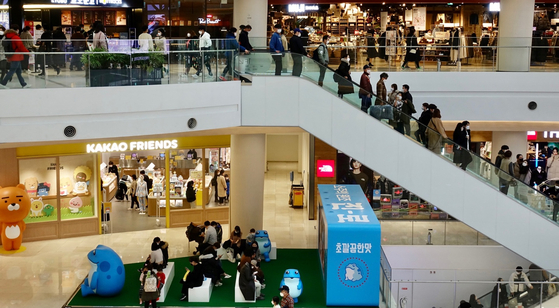 A shopping mall in Yeongdeungpo District, western Seoul, is crowded with visitors Sunday despite warnings from health authorities to cancel all nonessential outings. [YONHAP]


Schools have to run at a third of their capacity, spectators will be banned at professional sports games and all religious activities must be carried out virtually. Companies will be strongly recommended to allow at least a third of their workforce to telecommute.

Korea added 631 new infections of the coronavirus Saturday, the third-highest number of daily cases that the nation has ever registered during the entire pandemic, according to data from the KDCA.

Saturday’s positive test results came as a shock for health authorities because the nation usually sees fewer new infections on weekends than on weekdays — which means the daily toll could surge even higher in the coming weekdays. 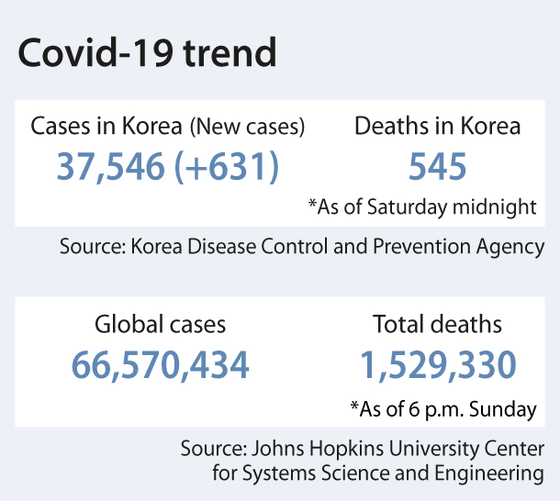 Fewer people get tested on weekends because private medical facilities that provide Covid-19 testing alongside public facilities usually open only during morning hours on Saturdays and close entirely on Sundays.

Health officials had hoped for daily infections to fall this weekend because it had been a week and a half since the central government imposed Level 2 restrictions on the Seoul metropolitan area, and past experience showed day-to-day cases shrinking about 10 to 14 days after social distancing levels were raised.

While presiding over a Central Disaster and Safety Countermeasure Headquarters meeting Sunday in Seoul, Prime Minister Chung Sye-kyun warned Korea was facing its “greatest crisis” in the pandemic and that the situation in the greater Seoul area was “extremely serious.” Chung urged the general public to refrain from holding any social gatherings for the time being so that everyone, including small-business owners facing restrictions in their operating hours, can return to their normal lives.

On a separate note, the headquarters said it would designate Monday through Jan. 3 as a “special period” for preventive measures, during which health officials will comb through crowded facilities to check their compliance with health and social distancing measures, and warn people to stay out of risky environments.

Officials begged the public not to meet with friends in person over Christmas and New Year’s Day and pleaded with local government offices to hold all year-end festivities online.

Among 631 Covid-19 patients who were diagnosed with the virus Saturday, 253 were in Seoul, 176 in Gyeonggi, 41 in Incheon, 34 in Busan, 15 in South Gyeongsang, 14 in South Chungcheong, 13 in North Chungcheong, 11 each in North Jeolla and Gangwon, nine in North Gyeongsang, eight in South Jeolla, three each in Daegu, Gwangju, Daejeon and Ulsan as well as two in Sejong City.

Out of the country’s 17 major cities and provinces, Jeju Island was the only place that didn’t add a single new patient.

The remaining 32 cases were imported: 12 from the United States, eight from Russia, two each from India and Germany and one each from Nepal, Uzbekistan, Indonesia, Poland, Ukraine, Sweden, Switzerland and Zimbabwe.

Five patients died Saturday, bringing total deaths to 545, while 211 patients recovered, raising entire recoveries to 29,128. As of Saturday at midnight, Korea had counted 37,546 coronavirus patients in all.