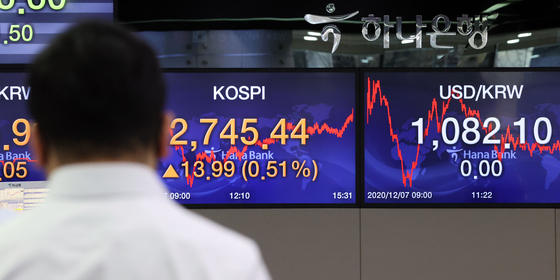 Korea's main bourse has been renewing new highs coming into December largely on the back of a massive buying spree from foreign investors. The Kospi closed on Monday at 2,745.44, up 0.51 percent from the previous trading day. [YONHAP]


Foreign investors net purchased 6.1-trillion-won ($5.6 billion) worth of stocks from Korea-listed companies in November alone, the most since September 2013.

According to the Financial Supervisory Service (FSS) Monday, foreign investors net purchased 5.8 trillion won of Kospi stocks and 268 billion won from the Kosdaq in November.

Foreigners were originally on a selling spree early this year, when the domestic stock market became extremely volatile because of the coronavirus.

They net sold Korean shares for five consecutive months from February to June, before posting net purchases in July. In August and September, they again reported net sales before turning back to buyers in October and November.

“Investment sentiment improved as hopes for economic recovery emerged and U.S. dollars are on a weak trend,” explained the FSS.

As of end of November, foreigners hold to 675.2 trillion won of Korean shares which is 30.8 percent of the entire market.

Foreign investors have a thing for Korean bonds