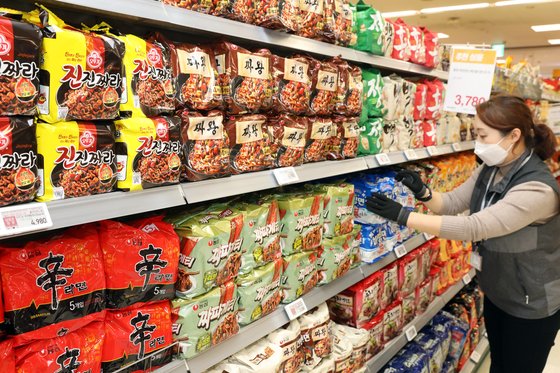 An employee organizes ramyeon at Emart’s Seongsu branch in eastern Seoul on Sunday. Sales of ramyeon in Emart this year exceeded beer for the first time in four years. [EMART]


For the first time in four years, Koreans are consuming more ramyeon than beer.

According to Emart, one of the largest retailers in the country, sales of ramyeon between January and November this year increased 5 percent on year, the No. 1 among product category by sales. That exceeds sales of imported beer, which have ranked first since 2017.

People spending more time at home as schools closed and offices adopted remote working systems is likely behind the surge in ramyeon sales.

“Sales of ramyeon dramatically jumped when the social distancing guidelines strengthened,” Joo Jae-hyung, a buyer at Emart who is in charge of the ramyeon sector, said. “Maybe it’s because ramyeon is one of the products that people can keep at home for a long period of time.” 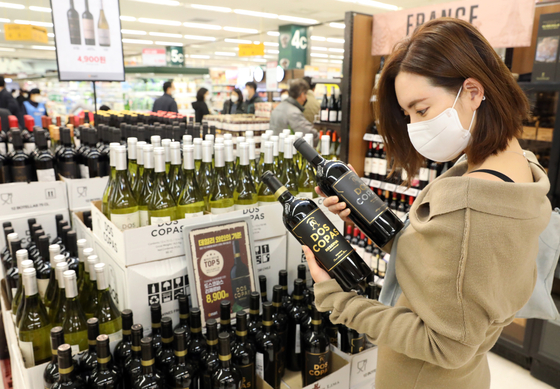 A model poses with wine bottles at Emart in Seoul on Sunday. During the January to November period, sales of wine rose 32.3 percent on year. [EMART]


Increased demand for wine is another reason behind the declined popularity of imported beer. With more people drinking at home, wine has been quickly gaining popularity.

As of mid-November, sales of wine in Emart hit 100 billion won ($92.4 million) for the first time. This means roughly 3.6 million people bought wine in Emart this year.

The rising popularity of wine has been boosted by rapidly falling prices. Emart in August introduced a line of wine called Dos Copas, costing just 4,900 won per bottle. Some 220,000 Dos Copas bottles were sold in the 20 days since its introduction.

Home appliances was another sector that saw spending shoot up. 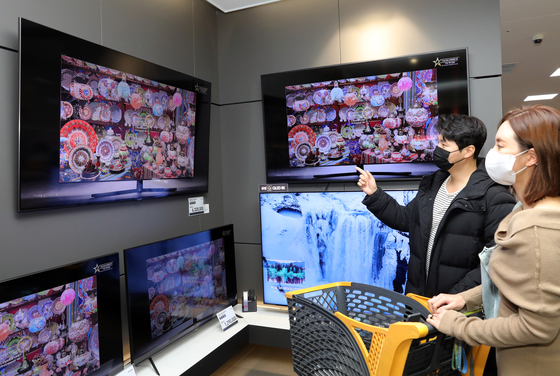 A model looks at TVs in the home appliance section on Sunday. Sales of TVs in Emart during the January to November period increased 28 percent on year, placing TVs in third place by sales. [EMART]

Sales of TVs at Emart so far this year increased 28 percent on year — making TVs the third most popular item in terms of sales.

“Demand for [TVs with] big screens rose as more people enjoy watching movies or dramas at home [amid the pandemic],” said Yang Tae-kyeong, head of Emart’s home appliances section. “More customers are entering the expensive home appliances market as they prefer offline purchases rather than online when they are buying costly products.”