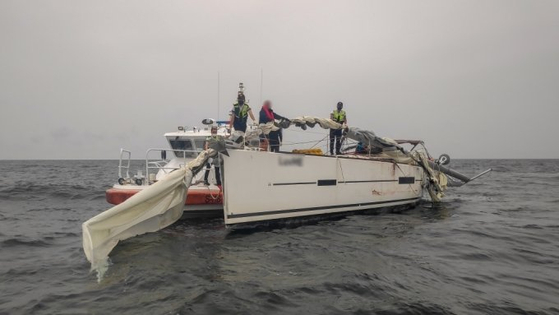 Han's yacht after colliding with a cargo vessel off the coast of Yeosu, South Jeolla, on Sept. 17. [YEOSU MARINE POLICE]

Prosecutors have charged a Korean man with attempted murder after he allegedly crashed his yacht at the end of a seven-month voyage from the Mediterranean, smuggled a firearm into the country and then shot his girlfriend while on the lam from immigration authorities.


The 46-year-old man, surnamed Han, is currently being detained and has also been charged with violations of customs and immigration laws, prosecutors announced Monday. Few details of the case have been released publicly, and his full name was not available.

But according to sealed court documents obtained by the JoongAng Ilbo, Han left Korea to visit Croatia in February, and subsequently came under investigation for suspected defamation and violations of telecommunication laws. Prosecutors stated in the court documents that they shared the case with immigration officials, and Han was added to the country's wanted list.

While in Croatia, Han bought a 15-ton yacht and began a seven-month sea voyage that included a stop in Guam, according to court documents.

On Sept. 17, as he approached the southern coast of Korea, Han’s yacht allegedly collided with a cargo vessel off the coast of Yeosu, South Jeolla, on Sept. 17. Photos publicly released by marine police after the crash showed the sail of the yacht was crushed in the collision, but according to prosecutors, Han was safely rescued by marine police.

“Han was at the time a victim of an accident in the waters, and we didn’t think to run his name through the database,” a marine police officer told the JoongAng Ilbo. “We handed him over to the quarantine officials and alerted the immigrations and customs offices about him.”

Han was at the time carrying a gun he had purchased during his sailing trip. He did not report it to the authorities, as is required by Korean law.

He was immediately tested for Covid-19 and was told to self-quarantine for 14 days upon reaching his final destination, which he told the authorities was Tongyeong, South Gyeongsang.

“We didn’t have any reason to hold Han quarantined at the port," a quarantine official told the prosecution, noting that it wasn't Han's final destination.

It's unclear whether Han knew he was wanted by immigration officials, but instead of heading to Tongyeong, he allegedly traveled to Sejong on Sept. 20, taking the gun with him.

After arriving in the city, prosecutors say Han met up with his girlfriend and an argument ensued, during which Han shot and severely wounded her. She survived, and Han quickly turned himself in to Sejong police and confessed to the shooting. Sejong police handed the case over to the Daejeon District Prosecutors' Office.

All this while, officials with Korea's customs and immigrations offices say they were unaware of Han's whereabouts.

“We had heard about Han entering the country, but we thought that he would have been required to remain quarantined on his yacht,” an official with the Yeosu Immigration Office told the JoongAng Ilbo.

“We had spoken to Han over the phone about procedures for re-entering the country, but he couldn’t be reached after Sept. 20. We didn’t have an official at the port to go check on him in person.”

The customs office told prosecutors that they had also thought Han was required to remain quarantined on his yacht.

“The different government bodies [quarantine, customs and immigration offices and police] will have to find ways to coordinate better,” the spokesperson of the customs office told the Joongang Ilbo.

In addition to the charges against Han, the prosecution have launched an investigation into customs and immigration officials and marine police officers for suspected dereliction of duty.

The case should serve as a warning to Korea’s border control and security system, said Park Dong-kyun, professor of police administration at Daegu Haany University and president of the Korean Association for Public Security Administration.

“There have been increased attempts to smuggle arms and drugs through the coasts of Korea,” Park told the JoongAng Ilbo. “These are wake-up calls to the government to come up with more comprehensive and detailed antiterrorism tactics and systems.”

Rest, relaxation and raving at sea