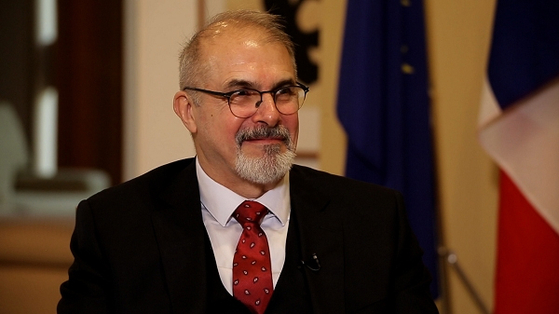 Philippe Lefort
The author is Ambassador of France to Korea.


On Dec. 12, the international community will celebrate the fifth anniversary of the Paris Climate Agreement.

The Paris agreement is the culmination of more than 20 years of discussions under the United Nations Framework Convention on Climate Change and the result of an exceptional mobilisation of the international community.

The Paris Agreement is the first universal instrument on climate change. It sets in stone an ambitious collective goal that is crucial for the preservation of global ecosystems and people’s living conditions: To limit global warming to 2 degrees Celsius (4 degrees Fahrenheit) or even 1.5 degrees Celsius by the end of the century compared with pre-industrial times. It also plans to increase the capacity of our societies to adapt to climate change and to initiate international transfers of funds to make this adaptation feasible for all countries.

Indeed, as extreme weather events multiply on all continents, sparing neither Korea nor France, we can affirm that we have entered the “era of consequences” of global warming. It is no longer possible to deny that climate change is real. Consequently, it is now high time for us to bring our climate policies into the “era of implementation.” No more empty words. Now is time for action.

Together, we must accelerate and show our citizens that we have not forgotten the promise made in Paris five years ago.

The Paris Agreement gives us the means to do so. It is a dynamic agreement designed to organize the gradual increase of countries’ commitments every five years. In accordance with its terms, each State shall publish by the end of 2020, and at the very least before COP26, an updated version of its Nationally Determined Contribution (NDC) reflecting its level of ambition, and a long-term low greenhouse gas emissions development strategy.

France is working actively to raise the European Union’s climate ambition. At COP21, the EU made unprecedented climate commitments by setting a target to reduce its greenhouse gas emissions by at least 40 percent by 2030 compared to 1990. With the strong support of France, the European Commission proposes to raise this target to at least 55 percent as part of the updated European NDC to be adopted in the coming days. The EU was also the first major global emitter to transmit a long-term strategy last March, which aims to achieve climate neutrality by 2050.

Echoing these European commitments, the recent announcement by President Moon Jae-in that Korea would achieve carbon-neutrality by 2050 raised high hopes in the international community and was warmly welcomed by many countries, including France. As the world’s fifth largest exporter and a member of the G-20, whose GDP is expected to rank ninth in the world this year according to the OECD, Korea is a driving force behind Asia’s economic dynamism. It also definitely has a leadership role to play on climate issues.

The coming days and months will provide several opportunities for Korea to stand out. The “Climate Ambition Summit” will be hosted by France, Britain and the United Nations, in partnership with Chile and Italy, next Saturday. Its aim is to put the climate back high on the international agenda, by inviting leaders from around all the world to present new commitments to give concrete expression to the Paris Agreement. The “Partnership for Green Growth and the Global Goals” summit, hosted by Korea next year, will be another major step towards COP26 in Glasgow.

In this context, we expect Korea to make bold commitments to encourage a regional and global raising of climate ambition. This of course includes setting an ambitious short and medium-term road map of concrete measures in line with its 2050 carbon-neutrality target. It also includes a significant increase in Korea’s financial commitments to the climate, commensurate with its means. A definitive end to the public financing of coal-fired power plants abroad would send another powerful signal in favour of the global energy transition.

Lastly, international cooperation will also be fundamental in meeting the challenges of climate change.

In this respect, I can but underscore the immense potential synergies between the Korean and French economies to help each other to become more respectful of the environment. It is particularly the case since Korea and France have both launched ambitious and green recovery plans, namely the “Korean Green New Deal” and its French equivalent “France Relance.”

Numerous innovative partnerships already exist between French and Korean companies in the field of ecological transition, clean energy — including civil nuclear power, offshore wind power and hydrogen — and storage technologies or electric vehicles. We must strengthen them so as to invent tomorrow’s solutions.

As it is often said, there is no Planet B. It is time for action.

Code Red for the globe (KOR)