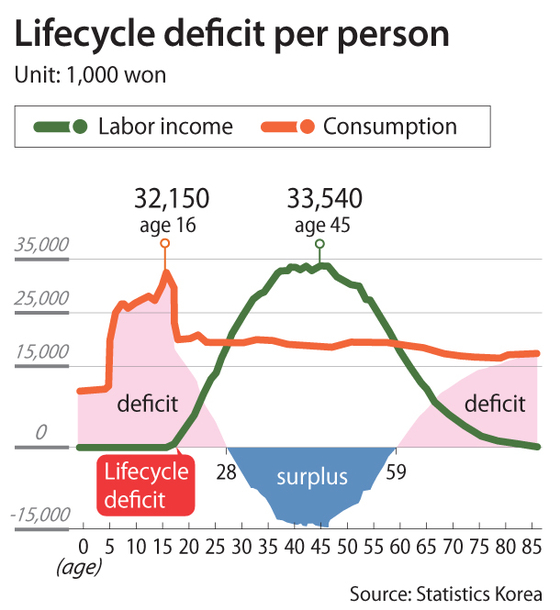 Koreans are on average living beyond their means, and increasingly so, recent statistics show.

The size of the lifecycle deficit, which is arrived at after subtracting consumption from labor income, in 2017 increased by 118.2 trillion won ($109 billion), or 7.1 percent, compared to 2016. The gap widened because the rate of the increase for consumption was bigger than that of labor income, according to Statistics Korea on Monday.

Most Koreans go through three stages during their lives: Deficit, surplus and back to deficit. According to the statistics agency’s 2017 data, the income of Koreans continues to grow over their lifetime until they are 28 years old, the point when their income starts to exceed their consumption. When they are 45 years old, their income reaches the peak. Their income then starts to gradually decrease from age 59, and their accounts switch to deficit. From that point, they start paying less tax and make their living with government subsidies.

Statistics Korea released the 2017 National Transfer Accounts (NTA), an annual report on the structure of the deficit and surplus for each age group using the information on the levels of consumption and labor income.

The report uses similar concepts as the System of National Accounts, which is a statistical framework created by the United Nations Statistics Division that aims to improve the evaluation of economies of countries through a common set of guidelines. The UN has a manual for NTA, which this report is based on.

The report based on 2017 data shows that on average, people are in deficit up to age 27. During childhood and early ages of teenage years, consumption occurs without any income. Over the lifetime, the age with the biggest amount of consumption is age 16, spending an average of 32.15 million won in one year. The age groups between six and 17 had more expenses than other age groups due to education fees.

Age 28 is when people on average start to have surpluses in their accounts, according to the report. The labor income gradually increases, peaking at 33.54 million won at the age 45. The wage income was reported to be the highest in the 40s, and those in their 50s earned a high level of income from their own private businesses.

After a certain point, which is age 59 for 2017, the income no longer goes up. Some people move to workplaces with lower wages and others retire, switching to deficit. For the older population aged 65 or higher, the government subsidies, such as health care and pension, exceed their expenses. Their income from the government aid becomes higher than the tax expense. Many people in this age group reportedly cover their deficit with the support from their children.

NTA only looks at the relationship between labor income and consumption, leaving out the capital income, which comes from the possession of wealth. Hence, the lifecycle deficit is a normal state.

Statistics Korea started releasing the NTA reports in 2019 because Korea’s population is aging at a fast rate, while also experiencing low birth rates. The report aims to provide statistics that may be used for policies regarding pension, health insurance, education and childbirth.

“The data is meaningful because we can observe people making up for their deficit with other types of income, such as property and transfer income," said a Statistics Korea spokesperson.