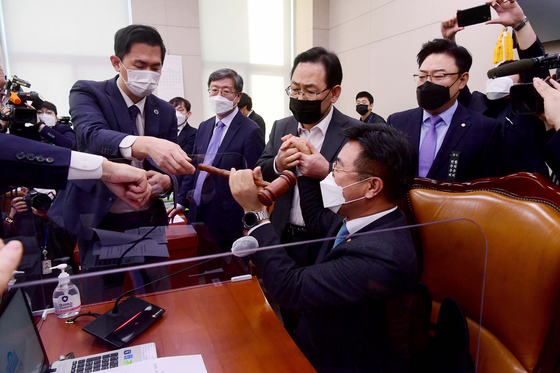 Lawmakers of the People Power Party, including its floor leader Joo Ho-young, try to stop Rep. Yun Ho-jung, chairman of the Legislation and Judiciary Committee, from banging the gravel to declare the passage of a controversial revision of the law governing the Corruption Investigation Office for high-ranking public servants. [YONHAP]


The ruling party on Tuesday used its majority to push through a bill setting up a powerful new corruption investigation agency to a vote later this week.

The Legislation and Judiciary Committee held a meeting in the morning and passed a bill to operate the Corruption Investigation Office (CIO) for high-ranking officials. The bill, sponsored by Rep. Kim Yong-min of the ruling Democratic Party (DP), was supported by 11 out of the 18 members on the committee.

Following the passage by the committee, the final gatekeeper of all bills, the bill advanced to a plenary session scheduled for Wednesday. Its passage is guaranteed since the DP has 174 lawmakers in the 300-seat National Assembly.

The main opposition People Power Party (PPP) fiercely protested the DP’s ramming through of the bill. The party, with 103 lawmakers, said the ruling party is misusing its super-majority in the legislature.

The CIO, the first state organization to take over some powers of the prosecution, was supposed to be launched in July. The PPP used its power to disapprove the DP’s picks for the agency’s first leader. Last month, the DP vowed to use its majority and change the law to neutralize the PPP’s rejection, which it effectively did Tuesday.

According to the CIO law, a special committee of seven tasked with vetting and nominating candidates to lead the agency is supposed to offer two finalists to President Moon Jae-in to choose from. The minister of justice, minister of the National Court Administration and the president of the Korean Bar Association are automatically included on the committee. The ruling party is supposed to name two members and the main opposition People Power Party (PPP) is supposed to name the final two.

Six out of seven committee members must agree to nominate a candidate for leader — a rule designed to ensure a nonpartisan and independent figure leads the agency.

The DP’s revisions to the bill say two-thirds — or five — of the seven committee members must agree to nominate a candidate, effectively taking away the PPP’s veto power.

“Immediately after the president issued an order, the DP acted as if it were a unit of airborne troops in a military operation [to pass the bill],” said Rep. Bae June-young, spokesman for the PPP. 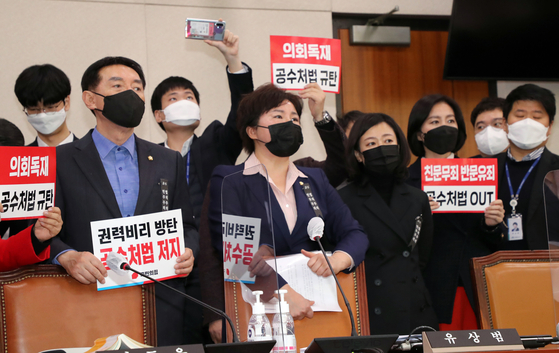 Lawmakers of the People Power Party stage a protest at the Legislation and Judiciary Committee on Tuesday to criticize the ruling party for railroading a revision bill to the Corruption Investigation Office law. [YONHAP]


Seok Dong-hyun, a lawyer nominated by the PPP as a candidate to head the CIO, said he will withdraw his candidacy, predicting that the CIO will become a “monster.”

The DP’s move to ram the revised bill through the Legislation and Judiciary Committee came one day after President Moon Jae-in urged the legislature to expedite the launch of the committee.

In opening remarks for a senior secretariat meeting on Monday, Moon said reforming powerful law enforcement authorities such as the prosecution is the final task he has to accomplish. He said the National Assembly has a chance to complete the reforms during the current legislative session.

The current session of the National Assembly is scheduled to end Wednesday, and DP lawmakers wasted no time to follow through with Moon’s order. The first move they made was ramming the bill through the Legislation and Judiciary Committee.

It took seven minutes for Chairman Yun Ho-jung, a DP lawmaker on the committee, to start the voting on the revised bill and conclude it.

Shortly after the committee meeting started, Yun abruptly introduced the bill for a vote around 11:05 a.m., prompting mayhem. PPP lawmakers started shouting, and Yun declared that he wouldn’t allow a discussion before a vote due to the chaotic situation. 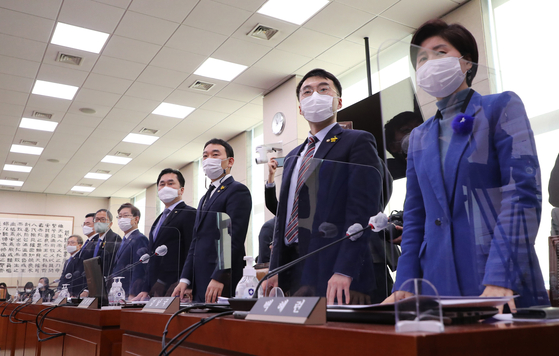 Democratic Party lawmakers stand up to express their support for the Corruption Investigation Office law revision bill at the Legislation and Judiciary Committee on Tuesday. [YONHAP]


The DP’s use of its majority to pass the bill was expected as it had already done so earlier Tuesday morning. At the request of the PPP, the bill was discussed at the Agenda Coordination Committee, a sub-panel of the Legislation and Judiciary Committee intended to talk about a highly divisive bill.

The Agenda Coordination Committee has six members, and it requires more than four votes to send a controversial bill to the Legislation and Judiciary Committee. Three DP lawmakers and Rep. Choe on the committee passed the revised bill in just minutes.

Other changes were also stated in the revised bill. According to the proposal, the requirement of 10-years of experience for an attorney to become a prosecutor for the CIO will be reduced to seven. 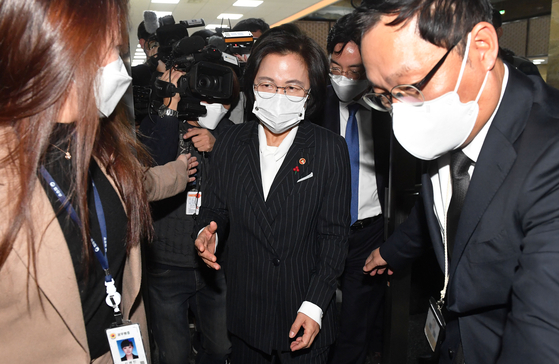 Justice Minister Choo Mi-ae leaves the Legislation and Judiciary Committee on Tuesday after it passes a revision bill to the Corruption Investigation Office. [YONHAP]


After sending the bill to the plenary session, the DP crowed that it was close to fulfilling President Moon’s election pledge.

“When the bill is passed at the plenary session, the legislative process to reform the law enforcement agencies will be competed,” DP Chairman Lee Nak-yon said. "Our next mission will be settling down the reform measures and thinking about the next stage.”

The PPP said it is considering a filibuster, but that could only delay the passage for hours. According to the law governing the National Assembly, a filibuster automatically ends when the legislature’s session ends.

At the end of last year, the DP and its allies used their majority to railroad through the initial bill establishing the CIO. The PPP's predecessor, the United Future Party, boycotted that vote.

The CIO will have jurisdiction over 6,500 senior officials, including the president; presidential aides; lawmakers; judges; cabinet members and vice ministers; the prosecutor general and prosecutors; mayors, governors and education office chiefs; and senior police and military officers.

The head of the new agency will serve a three-year term. The appointment does not require the legislature’s approval, although a confirmation hearing will take place.