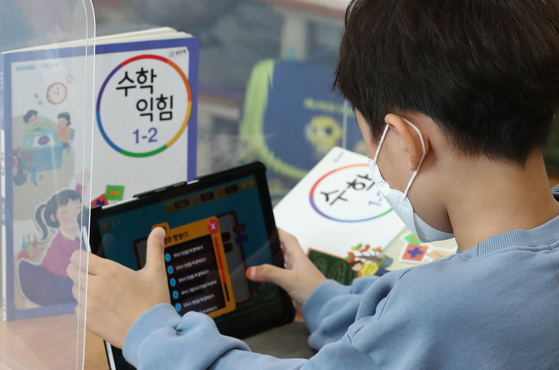 An elementary student listens to a math lesson through a tablet computer. [NEWS1]


Korean elementary and middle school students ranked in the top tier in a recent international evaluation of academic achievements in mathematics and science, but they also severely lacked interest and confidence in these subjects.

The Trends in International Mathematics and Science Study (TIMSS) released its 2019 report Tuesday providing data on the mathematics and science achievements of elementary students in 58 countries and middle school students in 39 countries.


The International Association for the Evaluation of Educational Achievement (IEA) has been running the TIMSS tests since 1995 in collaboration with Boston College. The TIMSS tests are conducted every four years for fourth and eighth graders and enable countries around the world to measure how effective they are in teaching mathematics and science.


According to the TIMSS 2019 results, Korean fourth graders in elementary school ranked third in mathematics achievement, with an average of 600 points. Singapore came in first with 625 points, followed by Hong Kong in second at 602. Taiwan came in fourth, followed by Japan and Russia.


Korean fourth graders came in second in science, with an average score of 588, following Singapore who came in first with 595 points. Russia came in third, followed by Japan, Taiwan and Finland.


Elementary students in Korea have consistently ranked in the top two or three spots in mathematics and first or second in science since the TIMSS study launched in 1995.


Korean second-year middle school students, equivalent to eighth graders, ranked third in mathematic achievement, with an average of 607 points, following Singapore in the lead with 616 points and Taiwan with 612. Japan came in fourth, Hong Kong fifth and Russia sixth.


Korean middle school students came in fourth in science, with an average of 561 points, falling behind Singapore at 608, Taiwan at 574 and Japan at 570. Russia and Finland tied in fifth with 543 points.


Likewise, Korean middle school students have ranked in the top three in mathematics and placed in the third to fifth spots for science since 1995.


Yet despite Korean students’ high average scores, their level of confidence and interest in their studies were among the lowest in the world.


Fourth graders’ confidence level in mathematics and science came in second-to-last place, at 57th out of 58 countries, with Filipino students coming in last.


Only 15 percent of Korean fourth graders answered that they are “very” confident in mathematics, compared to the global average of 32 percent. Likewise, they also had a very low level of interest in the subjects, placing 57th out of 58 countries in mathematics and 53rd in science.


Just 22 percent of Korean elementary students said that they enjoyed mathematics “very much,” falling well below the global average at 45 percent.


Korean middle school students similarly ranked low in their confidence level in the two subjects, coming in at 36th out of 39 countries for mathematics and 37th for science.


Just 8 percent of Korean middle school students responded that they were “very” confident in mathematics.


Likewise, their level of interest in math and science ranked the lowest in the world, according to TIMSS, coming in at 39th out of 39 countries in both subjects. A mere 8 percent of Korean middle school students say that they enjoyed mathematics “very much,” compared to the global average of 20 percent.


Other Asian countries such as Japan, Taiwan and Hong Kong that have a high level of academic achievements in math and science also faced similar trends of low confidence and interest in the subjects.


“The low level of interest and confidence is an issue that has pursued since 1995,” said Park Ji-young, a senior Korean Education Ministry official overseeing the educational opportunity guarantee division. “Because [students] work hard in order to achieve high grades, there is a problem of declining interest.”


Sang Kyung-ah, an education evaluation analyst with the Korea Institute of Curriculum and Evaluation, said, “There are many analyses of why [students from] East Asian countries lack interest and confidence, but there is also a trend of stressing humility and the instrumental value of study. There is a need for continued research and policy to improve upon this.”