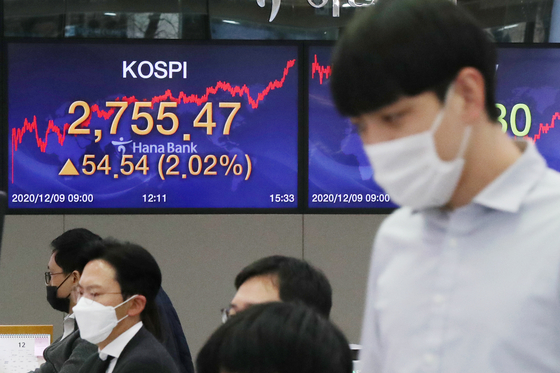 The final figure for the Kospi is displayed in a trading room at Hana Bank in Jung District, central Seoul, on Wednesday. [NEWS 1]


Korean stocks closed at an all-time high Wednesday, driven by the progress of Covid-19 vaccines and optimism over U.S. stimulus talks. The won rose against the dollar.

"Investor sentiment was boosted by the launch of mass vaccinations in Britain and the developments about the U.S. FDA's [Food and Drug Administration] authorization of emergency use for [Pfizer's] vaccine," NH Investment & Securities analyst Noh Dong-kil said.

Chipmakers, automakers and steelmakers fared well, with reignited stimulus hopes in the United States, following Senate Majority Leader Mitch McConnell's offer to set aside some factors from the relief package.

The local currency was trading at 1,084.8 won against the dollar, down 0.6 won from the previous session's close.