Korea's birth rate hit as low as 0.92 last year, the lowest in the entire world. This means that the average number of children born is now less than one per woman. While the average OECD birth rate is 1.65, Korea is the only country that is below one.

Low birth rates and an aging society may be one of the most critical problems that Korean society has ever faced. 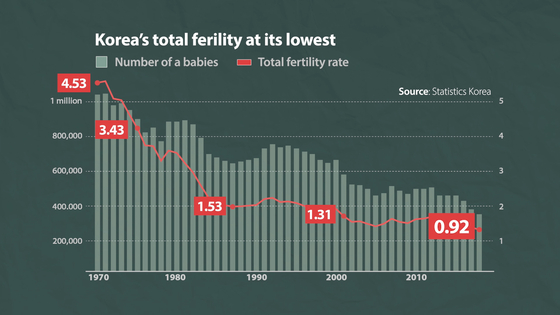 As the number of children decreases, schools will begin to close and the number of maternity wards will also decrease. Many baby products, such as school supplies, milk powder and toys won’t be sold as well.

The number of soldiers will shrink as the number of men that are to serve in the military shrinks.

As such, the government is reviewing measures such as increasing the number of women joining the military or easing the physical examination standards so that those with high blood pressure or diabetes will have to serve their military service.

But with medical advancements, people’s life expectancy has gone up.

Korea has already become an aged society where people aged 65 or older account for more than 14% of the total population. If the proportion of the elderly population exceeds 7%, it is classified as an aging society, and if it exceeds 14%, it is classified as an aged society. Currently, South Korea’s population consists of more people who are 65 years old or older than those who are under 15. People between the ages of 15 and 64 are also known as the working age population, and if there is a decline in this population, the economy loses its vitality.

As the number of senior citizens increases, the burden of medical expenses also increases, while spending shrinks. 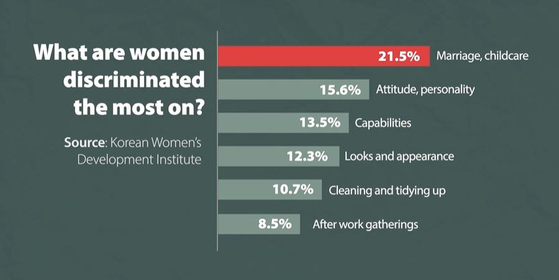 Why is the fertility rate falling?

Women are reluctant to have babies because of the family culture in which women are held responsible in raising children while attending to household work. Additionally, they face disadvantages at work due to childbirth and childcare.

Women face restrictions in advancing their careers. On top of being most likely to be discriminated for simply being a woman in a male-oriented workplace, women have to carry the burden of both childbirth and childcare.

Men are also reluctant to have children because jobs are scarce in a time of economic downturn, apartments costs are exceptionally high and education in Korea is very expensive.

Another issue is due to Korea’s competitive and growth-oriented culture that emphasizes being best at everything.

This environment makes it difficult for people to have children in a relaxed environment, causing the fertility rate to fall.

Breastfeeding is not a crime (KOR)

Breastfeeding is not a crime