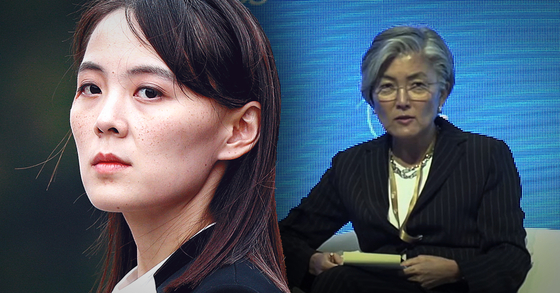 
North Korean leader Kim Jong-un’s younger sister Tuesday warned that South Korea’s Foreign Minister would “pay dearly” for her “impudent” doubts about the regime’s claims it has no Covid-19 cases.

In an English-language statement carried by the official Korean Central News Agency (KCNA), Kim Yo-jong said Minister Kang Kyung-wha’s “reckless” words during a trip to the Middle East were made “without any consideration of the consequences that she is too eager to further chill the frozen relations” between the two Koreas.

“Her real intention is very clear,” Kim continued. “We will never forget her words and she might have to pay dearly for it.”

The condemnation referred to a comment by Kang at a forum in Bahrain on Saturday hosted by the London-based International Institute for Strategic Studies, in which she said it was “hard to believe” Pyongyang’s continued claims that it has had no confirmed coronavirus cases.

“All signs are that the regime is very intensely focused on controlling the disease that they say they don’t have, so it's a bit of an odd situation,” Kang said in English.

Though no confirmed cases have been reported by Pyongyang, the World Health Organization (WHO) said the regime has had more than 8,000 suspected cases in recent months.

The regime’s visceral response to Kang’s comment may stem from the fact that it was Kim Jong-un himself who proclaimed the “zero cases” theory in a speech ahead of a major military parade in October.

North Korea regards its supreme leader as infallible on every account, so Kang’s reservations about his claim may have been perceived as a slight by Pyongyang.

The statement also broke an extended silence from the regime on inter-Korean relations, which effectively collapsed over the summer after Pyongyang demolished a liaison office with the South.

The North’s public face behind those provocations was Kim Yo-jong, who South Korean intelligence says has taken charge of the country’s foreign and inter-Korean policies.

The younger Kim’s last official statement directed at the South came in June, in which she slammed Seoul’s complacency over anti-Pyongyang activists on its soil dispatching propaganda leaflets across the border into the North and threatened to sever official communications with the South.

The North further warned of graver military measures toward the South, but then appeared to back off.

The sabre rattling had an effect: Despite accusations that it was taking marching orders from the North, Seoul’s ruling Democratic Party pushed through a bill banning the spread of propaganda leaflets on the border, which was passed earlier this month.

Elated by the development, South Korea’s top inter-Korean official, Unification Minister Lee In-young, just a day ago appeared sanguine about the prospect of renewed diplomacy on the peninsula by January, calling the current situation a “turning point” in relations.

That prognosis may have been premature.

Experts in South Korea said the irritation exhibited by Kim’s statement would negatively affect Seoul’s push to improve relations by offering Pyongyang humanitarian aid in the form of Covid-19 vaccines and medical equipment.

“The likelihood that North Korea will accept a proposal to send vaccines appears to have gotten even lower [as a result of Kang’s comment],” said Lim Eul-chul, a professor of North Korean studies at the Institute for Far East Studies at Kyungnam University.

Others, however, said Pyongyang appears to be showing restraint. For one, Kim Yo-jong’s statement was not published domestically in the North’s official newspapers and other media outlets.

According to Yang Mu-jin, a professor at the University of North Korean Studies, that fact that the message came three days after Kang’s statement on Saturday shows it may have been timed to coincide with U.S. deputy Secretary of State Stephen Biegun’s final trip to Seoul.