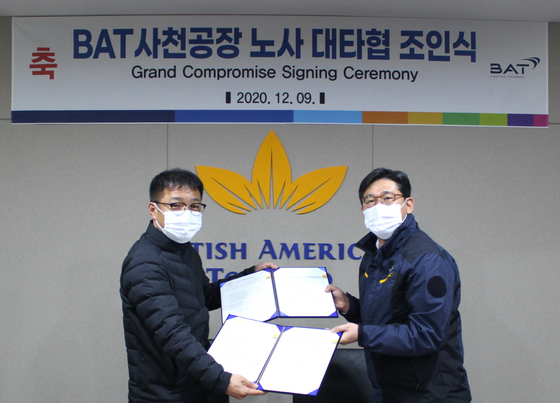 Kang Seung-ho, head of BAT Korea’s Sacheon factory, right, and Koo Sung-il, head of the labor union, pose during a compromise signing ceremony which was held at the factory in South Gyeongsang on Wednesday. [BAT KOREA]

British American Tobacco (BAT) Korea and its union reached an agreement on a new salary system, the company said Thursday.

Under the agreement, a salary cap and salary peak will be introduced. The salary cap is applied when an employee’s salary exceeds the company's standard wage for the job position. It will be implemented for two years from 2021.

The two sides also agreed on a salary peak system, where the annual wage will reach a peak at 55 years and gradually reduce afterwards until retirement. The retirement age of those employees will be extended to 62. The system will be implemented starting from 2023.

The agreement between the two parties was signed in a ceremony at BAT Korea's Sacheon factory on Thursday.

According to the London-based tobacco company, the agreement aims to establish a solid foundation for the enhancement of the production competitiveness and sustainable growth.

“In such a time when the future is more uncertain than ever due to Covid-19, I’m grateful to all of the employees who recognized the current situation of the business environment and shared their will for a win-win and mutual development,” said Kang Seung-ho, head of BAT Korea’s Sacheon factory. “We will maintain sustainability and contribute to the national economy and local communities through manufacturing built on trust.”