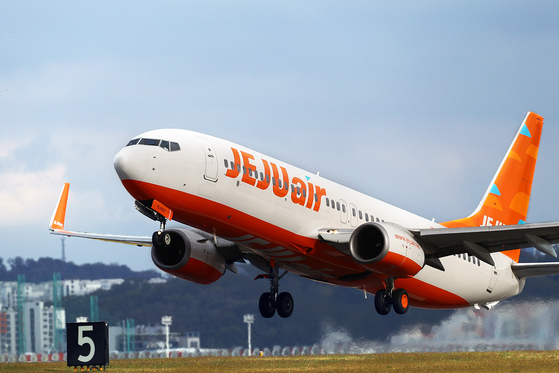 A Jeju Air plane takes off from an airport. [YONHAP]

Jeju Air is the second airline to be supported by the fund set up by the government in May to help the country’s key industries withstand economic headwinds during the pandemic. The first was Asiana Airlines, which was promised 2.4 trillion won of support from the fund in September.

According to KDB, which acts as an administrator for the fund, 25.7 billion won will be loaned for operations and 6.4 billion won worth of perpetual convertible bonds of the airline will be purchased.

To receive the funds, Jeju Air needs to meet several conditions, including maintaining 90 percent of its workforce, improving governance and freezing wages of senior employees.

The airline has been hard hit by the pandemic.

From February through October, more than half of its staff was placed on paid leave, with salaries supported under a different government program.

Apart from the 32.1 billion won, the airline borrowed 57.4 billion won from the Export-Import Bank of Korea, its main creditor bank, last month.

The airline has been posting operating losses all year. In the first quarter, it lost 65.7 billion won on an operating basis. In the second and third quarters, that figure was 85.4 billion won and 70.1 billion won, respectively.

The number of flights it operates shrank significantly.

Through the third quarter this year, it operated a total of 27,506 flights, a 54.7 percent decline from the 60,683 flights it operated in the same period last year, according to data accumulated by the Ministry of Land, Infrastructure and Transport.