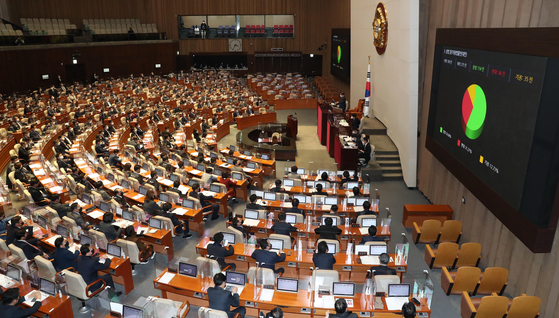 A digital board at the National Assembly shows the voting results for a law aimed at tightening monitoring of corporate governance on Wednesday. [OH JEONG-TAEK]


Major holding companies may be forced to increase their stakes in subsidiaries, costing some of Korea’s biggest corporations billions of dollars or forcing them to undertake massive restructurings.

The controversial changes, which come as the Democratic Party pushes through a series of corporate reform and labor laws using its overwhelming majority, could frustrate plans to transform SK Telecom into an intermediate holding company under SK Holdings.

Under the amended law, the telecom operator is required to raise its ownership of SK hynix to at least 30 percent from the current 20.01 percent. The deadline for this is the beginning of 2022.

Increasing the stake will cost the company an estimated 8.7 trillion won ($7.9 billion).

This could force the splitting SK Telecom into two units, one for the telecom business and the other for controlling SK Hynix and other subsidiaries, before the law comes into effect.

“It would be extremely difficult for SK Telecom to secure 8 trillion won no matter how much effort it put to increase cash reserves,” said Professor Cho Myeong-hyeon at Korea University’s business school.

Other major corporate names are also feeling the heat.

They may have to offload major blocks of shares to avoid being subject to the new criteria for tighter monitoring by the Fair Trade Commission (FTC). Under current rules, the FTC puts companies under special surveillance for excessive related-party transactions when the founding family owns more than 30 percent of a company. That limit has been lowered to 20 percent.

Hyundai Motor Group Chairman Euisun Chung and related parties control just under 30 percent of Hyundai Glovis, meaning they will be closely monitored for anti-trust violations under the new rules unless they unload shares.

The regulation is set up to prevent these families from profiting by having companies sign sweetheart deals with companies in which they own a large stake or all the shares, thus extracting value from the enterprise and harming the interests of shareholders.

SK Holdings and Hanwha will also come under the FTC’s monitoring with the stricter ceiling as the groups are more than 20 percent owned by founding family members and related parties.