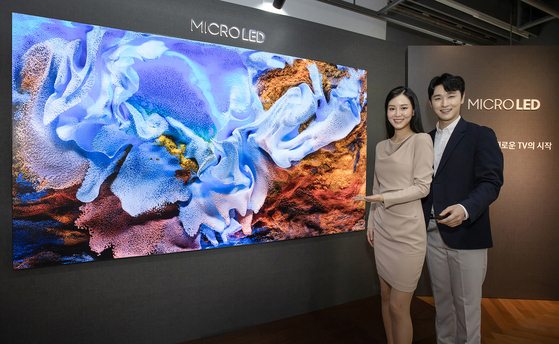 The success of the 110-inch micro LED TV will serve as a test to see if the high-definition screen, often used as digital signage, can take off with household consumers who already have the option of premium televisions using other high-end formats like organic light-emitting diodes (OLEDs).

The new release will sell for 170 million won ($156,000) with preorders set to start this month before an official launch next year.

Samsung’s first entry into the micro LED TV market, the 148-inch “The Wall,” was available only by special order and came with a hefty price tag of about 400 million won after being first introduced at 2018 Consumer Electronics Show in Las Vegas.

“Micro LED displays use micrometer-sized LED lights to eliminate the backlight and color filters utilized in conventional displays. Instead, it is self-illuminating — producing light and color from its own pixel structures,” Samsung said in a statement.

The design comes without bezels to create a more immersive screen experience and an embedded sound system equipped with object tracking audio.

“As consumers rely on their televisions more than ever, we are incredibly excited to bring the 110-inch Micro LED to the commercial market,” said Han Jong-hee, president of visual display business at Samsung Electronics.

The new model will likely compete with premium TV lineups at a similar price range from LG Electronics, such as its rollable OLED TV.

LG has also developed micro LED panels under its Magnit brand, but the products are tailored for digital signage — not the household setting.

“Since OLED displays can work as self-illuminating without a backlight, and deliver stunning picture quality for retail consumers, we don’t see micro LED as an option for household consumers,” said a spokesperson at LG Electronics.

“We see micro LED as more suitable for industries, focusing on Magnit, which was launched in September globally."

The micro LED TV market is still in the early stage of development, accounting for less than 1 percent of the entire TV market.

But the market size is expected to grow to $228 million by 2026 from an estimated $50 million or less this year, according to market tracker Display Supply Chain Consultants.