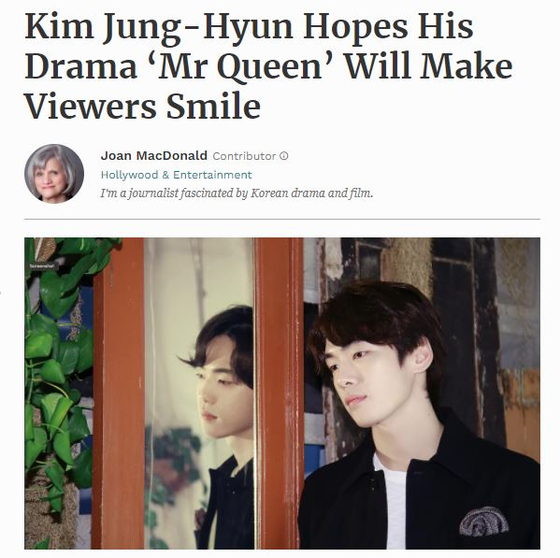 
American business magazine Forbes has put an unusual spotlight on Korean actor Kim Jung-hyun by posting a fairly long article on the actor on Dec. 8. Kim’s local fans are thrilled at his unexpected turn on the international stage.

Joan MacDonald, a contributing journalist to Forbes who says she’s “fascinated by Korean drama and film,” interviewed Kim, who plays a Joseon-era (1392-1910) king in the upcoming historical drama “Mr. Queen.”

The article goes through the awards the actor has won in his acting career of five years, stressing the fact that Kim appeared in the hit drama “Crash Landing On You,” which “became the highest rated tvN drama and is the third-highest-rated Korean drama in cable television history, but it also holds personal significance for Kim,” the article said.

“Mr. Queen” is set during the reign of King Cheoljong (1849-63) in the Joseon Dynasty, played by Kim, and tells the story of a man named Bong-hwan from present times who becomes trapped in the body of Queen Kim Cheorin. The drama series begins airing on Saturday.