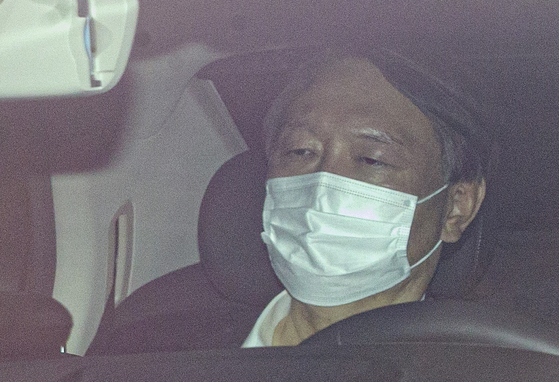 
An unprecedented disciplinary hearing against Prosecutor General Yoon Seok-youl began Thursday, and the Ministry of Justice’s tribunal rejected his motions to disqualify four out of five participants in the process for alleged bias against him.

The disciplinary hearing for Yoon, who was appointed by President Moon Jae-in in July 2019, started in the morning and was prompted by Justice Minister Choo Mi-ae’s accusation last month that the nation's top prosecutor was suspected of six counts of ethical and legal misconduct. She said an internal investigation uncovered the lapses, including Yoon’s alleged ordering of illegal surveillance of a judge.

Yoon is the first prosecutor general to face such a disciplinary process. The hearing started at 10:35 a.m. and according to the law governing the process, the hearing was operated like a criminal trial.

Yoon was represented by three lawyers. Yoon, who has denied all charges, did not attend the hearing. 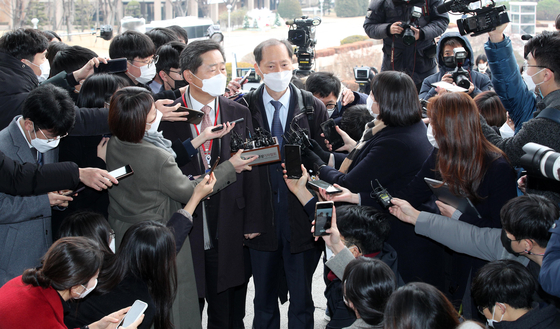 
Yoon’s lawyers started off by demanding the hearing be rescheduled, complaining that the ministry did not offer them basic information to prepare for his defense. They said the ministry refused to name the panel members or give details of the report that Choo had used to bring charges against Yoon. Yoon’s lawyers only became aware of the panel members’ identities after the hearing started on Thursday. 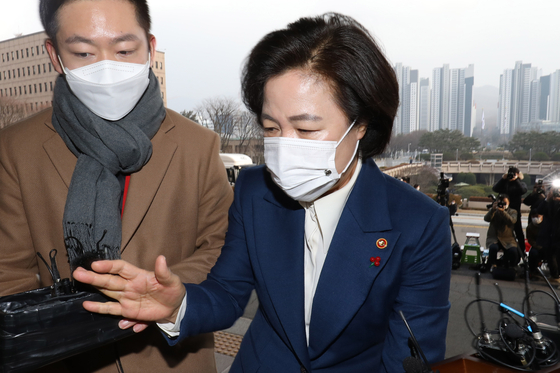 
The panel rejected the request and ordered a recess one hour into the hearing. The lawyers were told to file motions to disqualify panel members they objected to when the session resumed in the afternoon.

For Yoon’s disciplinary hearing, Choo picked Shin Seong-sik, head of the Anti-corruption Department of the Supreme Prosecutors’ Office, and Shim Jae-cheol, head of the Internal Inspection Bureau of the Ministry of Justice.

Since Choo is the petitioner who brought the charges against Yoon, she did not participate in the process. With Choi absent, the hearing started with five members, and Chung served as acting chairman.

Yoon’s lawyers demanded that Vice Minister Lee Yong-gu, Professors Chung and Ahn and Shim of the Justice Ministry be disqualified for apparent biases against Yoon. Of the five panel members who attended the hearing, the lawyers only accepted the participation of Shin.

Chung is member of a nongovernmental group, the Lawyers for a Democratic Society, that has been a patron of the Moon administration. Since Moon took office, Chung has served on a factfinding committee led by the Justice Ministry to uncover misconduct and abuse of power by the prosecution in the past.

In a recent media interview, Chung endorsed Choo’s argument that Yoon had breached his duty to maintain political neutrality as prosecutor general.

Vice Justice Minister Lee, appointed by Moon last week, is a key ally of the administration. The former judge had headed the Legal Affairs Bureau of the Justice Ministry since August 2017. When Choo was nominated as justice minister, he prepared her for her confirmation hearing.

Shim of the Justice Ministry, however, recused himself, leaving only four members to decide Yoon's fate.

Yoon’s lawyers cried foul about Shim’s timing because he took part in the decision-making process to reject the motions and then recused himself.

With the four members attending the afternoon session, Yoon’s lawyers asked the committee to call eight people as witnesses. Some of them were prosecutors critical of Choo’s decision to start the disciplinary action against Yoon, such as the Justice Ministry’s internal inspector Ryu Hyeok, while others were allies of Choo such as Lee Sung-yoon, head of the Seoul Central District Prosecutors' Office.

The panel was expected to take some time to reach a decision on that request.

After Yoon’s lawyers present their cases, the committee members will decide whether to punish Yoon or not and what the punishment should be.

It requires a majority of the four panel members to make a decision, meaning three members.

The panel can decide to clear Yoon or to issue no punishment even if they think he was guilty of some misconduct. Other possible punishments range from a salary cut to dismissal.

It remained to be seen if the panel would allow all witnesses selected by Yoon to testify. The hearing ended Thursday night without announcing a conclusion.