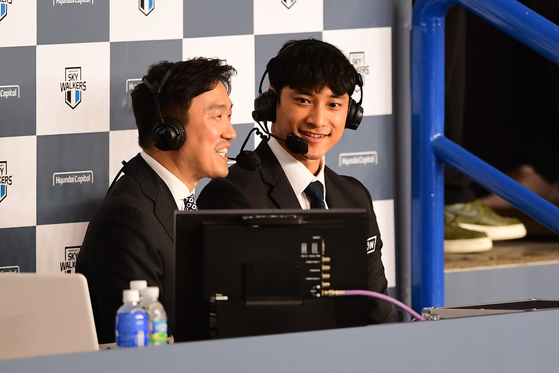 After retiring as a pro volleyball player, former star player Kim Yo-han, right, returned to the Korea Volleyball Federation as a commentator. [KOVO]


Former volleyball star Kim Yo-han is back on the court, or at least courtside.

But the former national team star is appearing in a different uniform these days, swapping his old jersey for the suit and tie of the commentator's box.

Kim made his debut as a commentator back on Nov. 21, during a game between the Cheonan Hyundai Capital Skywalkers and Uijeongbu KB Insurance Stars.

With his appearance in the booth, Kim was back in the volleyball world for the first time in a year and a half, since the 2018-19 season.

“I was even more nervous than during my very first game,” Kim said after match. “It wasn’t easy.”

For Kim, his transition to a commentator came naturally. He said that he got a call from KBS N women’s volleyball commentator Han Yoo-mi.

“She asked me to have a meeting at the broadcasting company so I went,” Kim said. “But once I got there, everything was kind of set up like I’d already accepted it.”

Kim's decision to become a commentator may have been practically decided for him, but once he accepted the role he immediately got serious about making sure he did a good job. And the clock was against him.

“Normally, you practice for months before the start of the season,” Kim said. “But in my case, I was only able to practice about twice because of the Chuseok holidays. Once the season started, I practiced with an announcer and started last month.”

And it hasn't all been easy. Although Kim knows the game as well as any player, the transition to commentator has been a lot harder than he expected.

“It’s hard to explain the game in words, even if I know what's happening,” Kim said. “I can’t use terms that I used back when I was a player. Also, once the play is finished, there’s about 10 seconds until the next serve. It’s really hard to explain everything within that time."

Kim first started getting attention on the court back when he was in college. Alongside Park Chul-woo of the Suwon Kepco Vixtorm and Moon Sung-min of the Skywalkers, Kim proved a crucial part of the gold-medal-winning Korean squad at the 2006 Asian Games in Doha, Qatar.

At the 2007-08 draft, Kim was drafted first by the KB Insurance Stars. Along with his outstanding performance on the volleyball court, Kim quickly became a fan favorite — both for his playing style and his good looks.

Kim picked up his first-ever trophy in the 2012 season at the Korea Volleyball Federation (KOVO) Cup. In 2017, he moved to the Ansan OK Savings Bank Rush & Cash and just two seasons later, Kim called it quits.

Having only lifted the KOVO Cup, a fairly minor trophy in Korean volleyball, throughout his career, Kim has the dubious honor of being the third-highest scoring player in the history of the V-league, at 4,252, but without ever having won the KOVO regular or championship title. The only people to have scored more than Kim are his old national teammates Park and Moon.

When Kim first retired, he left the sport completely. In a surprise move, he took a job as the director of public relations at a gaming company and then appeared on the JTBC variety show “The Gentleman’s League.”


“After I retired, I didn’t watch volleyball at all for the first year,” Kim said. “I was asked to appear in volleyball-related programs, but I declined at the time because I wanted to do something else.”

Kim’s sudden return to volleyball wasn’t only inspired by Han. He also got some advice from Lee Man-ki, former ssireum, or traditional Korean wrestling, player who also appears on “The Gentleman’s League,” where famous athletes from different sports form a football team.

“Man-ki, who has experience commentating ssireum matches, reminded me that I only get to appear in variety shows because I played volleyball,” Kim said. “He said that since my expertise is volleyball, I should repay all the love I received through the sport if I get a chance. And that’s when I got the offer [to commentate].”

Although Kim no longer appears in the show due to an Achilles' heel injury, his time playing football reminded him how much fun sports can be.

“Volleyball has its charm but football is also really fun,” Kim said. “Since I never played this sport, it’s different. But running 70 to 80 meters [230 to 262 feet] across the field was really difficult. If football players jumped, they would find that difficult too. I used to score a lot back when I played volleyball but in football, it’s so hard to score. On days when I don’t score, I think a lot about why I couldn’t score.”

Commentating isn't the only thing on Kim's schedule these days. He may not be on the JTBC show anymore, but he does still work for the gaming company. He also has this new heel injury to deal with, and although he's not a pro athlete anymore, Kim takes recovery very seriously.

But being a commentator does mean he's still keeping a close eye on the volleyball league.

As of Thursday 6 p.m., Kim’s former team, KB Insurance Stars, are ranked second in the regular season standing after the first 14 matches, with a record of 10 wins and four losses, totaling 28 points.

His other former club, OK Savings Bank Rush & Cash, are ranked third with a record of nine wins and three losses, totaling 24 points.

“Since both teams have been struggling toward the bottom [of the regular season standing] over the past few seasons, I was really hoping that they would win this year. I feel like a new team should rise to the top [so the competition can help boost] the popularity and fun of volleyball.”