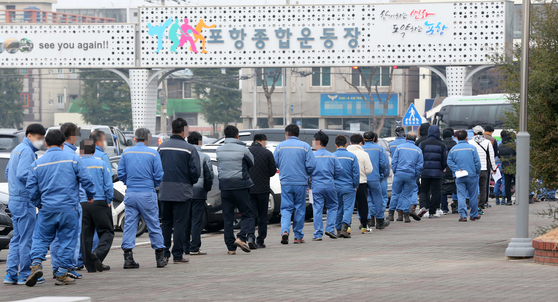 Workers at the Pohang Iron and Steel Industrial Complex form a long queue on Friday at the Pohang Stadium in Pohang, North Gyeongsang, to take Covid-19 tests. Since Thursday, the city has administered tests to 3,400 workers who recently had trips outside the city or who displayed symptoms. [YONHAP]


With an overwhelming majority of Korea's new Covid-19 infections occurring in Seoul and surrounding Gyeonggi, Prime Minister Chung Sye-kyun announced Friday that hundreds of police officers, soldiers and government employees will be deployed to local health centers in the region to assist with contact tracing.

“The state of the outbreak in the greater Seoul area is worse than the one we had in Daegu and North Gyeongsang [earlier in the year],” Chung said during a Central Disaster Management Headquarters meeting at the South Jeolla provincial government office on Friday. “We have to focus all of our attention on containing the infections there.”

Korea added 689 cases Thursday, of which 16 were imported. Among the domestic cases, 250 were located in Seoul and 225 in Gyeonggi.


Around 800 officers, soldiers and government employees will be placed in local health centers in the greater Seoul area to assist with epidemiological surveys, Chung said.

Korea's proportion of new cases for which the source of infection couldn't be determined has been slowly increasing, and currently stands at 20.5 percent, according to the Korea Disease Control and Prevention Agency (KDCA). By comparison, the untraceable rate was just 3 percent in mid-April, when Korea's overall caseload was largely under control following an initial wave of infections in late February and March.

Epidemiologists and quarantine officials have access to Covid-19 patients’ cellphone GPS records and credit card payments, in addition to other personal information, to trace the outbreaks. Since Korea experienced its first wave of virus cases, the KDCA and local government offices have been cooperating on epidemiological surveys.

In light of the rising number of cases, the Korean government announced earlier in the week that 150 additional testing centers will be set up in the greater Seoul area by Monday. The region has 211 centers currently in operation.

The ongoing surge of Covid-19 cases in Korea continued Thursday as the nation marked another day of nearly 700 new coronavirus infections.

Quarantines being dropped for people coming to Korea