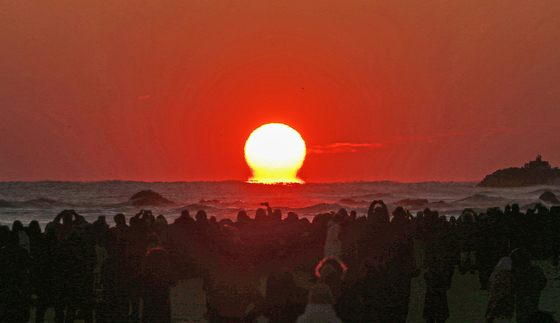 Crowds gather in Mangsang Beach in Donghae, Gangwon, to see the first sunrise of the year on this year’s Jan. 1. [DONGHAE CITY GOVERNMENT]


With Christmas and New Year's Day just around the corner, local governments are scrambling to strengthen measures to prevent the spread of the virus during the holiday season.

In Korea, many people across the country visit beaches on New Year's Eve to witness the first sunrise of the New Year, with the northeastern province of Gangwon being a favorite destination.

A resort near a beach in Samcheok, Gangwon, which has about 500 rooms available, is currently fully booked between Dec. 25 and Jan. 3 next year.

“The resort is all booked up from the end of the year to the beginning of the year,” the resort owner said. “If anyone wants to make a reservation during the period, I believe they must look for other places rather than near beaches.”

With many people expected at Samcheok, the city government said it decided to cancel all the planned festivals or events and strengthen its preventive measures against the virus.

The city government currently disinfects public facilities and toilets near beaches once a day — but decided to do it twice daily through the end of the holiday season.

“We have canceled all the planned events [during the period] in order to prevent people from gathering,” said a public official from Samcheok city government’s tourism policy department.

Restaurants are also moving quickly to reduce the risk of virus transmissions during the holidays.

Restaurants near Samcheok beaches have installed partitions on tables to reduce contact between people.

“As Christmas and New Year’s Day is the time period when lots of people across the country gather all together, residents [of Samcheok] are also greatly worried about it,” said Kim, 46, who runs a restaurant near Samcheok beach in Gangwon. “We are planning to promote takeout service during the period in order to minimize the human contact.” 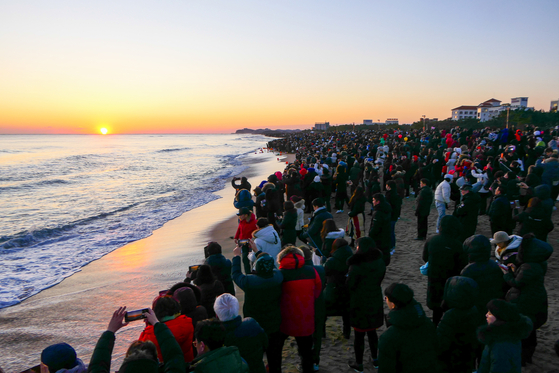 
Yangyang County in Gangwon is another popular destination during New Year's.

Since accessibility has been improving with the opening of the Seoul-Yangyang highway in 2017 and the number of surfing-related business has increased, Yangyang has become a popular spot for young people.

“I’m deeply concerned because beaches in Yangyang are always full of visitors every end of the year,” Choi, 52, a resident of Yangyang County, said.

Amid growing concerns over the virus pandemic, Yangyang County Office decided to cancel its annual New Year's festival this year.

Gangneung city government also canceled its sun-greeting event that the city has held annually in Jeongdongjin. The event will be aired on the city government’s official YouTube channel from 7 a.m. to 8 a.m. on New Year’s Day instead.