Self-employed are the big losers with social distancing

Self-employed are the big losers with social distancing 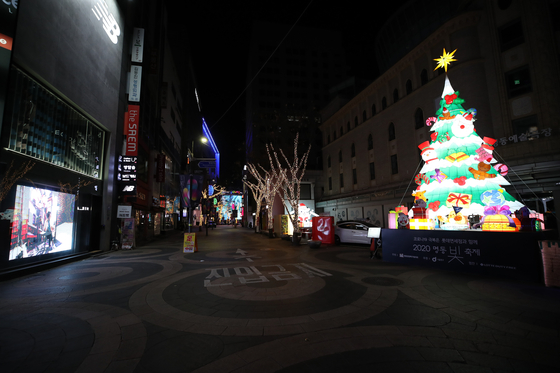 
Last month, Mr. Park was forced to lay off the workers at his restaurant near Seodaemun Station, western Seoul. Park, 41, and his wife now do all the cooking and serving. The coronavirus pandemic has cut monthly sales to below 1.5 million won ($1,400), around one-fourth the 6 to 7 million won they used to pull in.

“There are a lot of offices nearby, so we had a lot of steady business from companies,” said Park. “But they have implemented remote work for their employees, so no one comes to the office and they don't need to come here. After rent and taxes, we are facing losses, but I hold on by thinking of my baby.”

Level 2.5 social distancing measures are pushing the self-employed to the wall. Business districts may still look busy, but the impact of months of less stringent measures have already taken their toll. Almost all companies have prohibited drinking or dinner gatherings. For many companies, 50 to 70 percent of employees have been working from home.

“When a restaurant business can’t run for three weeks, it is the end,” said a restaurant owner in the Gwangwhamun area, central Seoul. “In January, I need to pay all kinds of fees, and February is always a slow month because of spring break at schools. In March, I need to pay tuition for my children. I am clueless as to how I can persist for the three months, and I'm on the verge of tears. I am behind on employees’ payroll and rent. What use is the 1 million won emergency relief fund? Please roll out a vaccine as soon as possible.”

“When Level 1 social distancing measures were in place, there were still quite a lot of office workers coming for lunch, but even that number has been cut by more than half,” said an employee of a Korean-style sashimi restaurant. “I get out of my seat to greet customers even upon spotting reflections of people in the automatic door at the entrance.”

This was the first time in 12 weeks that sales dropped to the 70 percent range compared to a year earlier. Aside from the Chuseok holidays, the last time sales had fallen so low was the first week of September.

By region, the metropolitan region suffered the most, since it has been subject to the strictest social distancing measures. Sales of self-employed businesses fell 31 percent on year.

The retail industry has been in despair.

“The cover of Time Magazine is a good example of the sentiment in the retail world, which has been experiencing a huge blow,” said a retail industry analyst.

Time Magazine uploaded a photo of its Dec. 14 cover on Twitter. It shows the number 2020 with a big red "X" through it, with the headline, “THE WORST YEAR EVER.”

Some companies have put effort into selling online.

“Companies are expanding their online businesses through online platforms and their own websites as well as live commerce, but since the discount rate is high, there is a dilemma in which the profits do not increase,” said a source at a fashion company. “It is true that online [business] is on the rise, but it is still a question whether it will help with earning profits.”

Self-employed business owners on the brink of collapse have been railing against social distancing measures. On the petition section of the Blue House website, one petition has asked for government help on rent and loan payments. That petition has gained more than 121,700 signatures as of 5 p.m. on Friday.

“While the government has been going back and forth between trying to be safe but also trying not to hurt the economy, self-employed business owners feel the brunt,” said the owner of a restaurant in Sewoon Plaza in Jongno District, central Seoul. “Self-employed businesses tend to drive domestic demand. Instead of providing one-off emergency relief funds, the government should research solutions to help the businesses recover and end the virus crisis.”