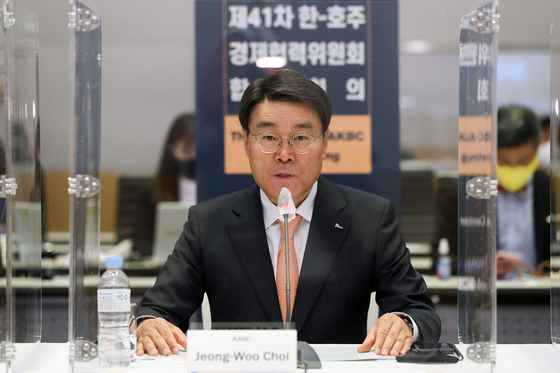 
Posco will scale up hydrogen production capacity to five million tons in the next three decades to meet growing demand for the clean energy source and foster new growth drivers, the company said on Sunday.


The announcement marks the Pohang, North Gyeongsang-based unit’s entry into the production and sales of hydrogen gas since it has been using the element — generated from steel production — to generate electricity for its steel manufacturing.


Posco also set the sales target of 30 trillion won ($28 billion) alongside with its pledge to produce up to five million tons of hydrogen by 2050, in line with its efforts to reduce its reliance on fossil fuels and transition to renewable energy sources.


The company plans to establish a hydrogen business unit next month and collaborate with research agencies at home and abroad to develop related technologies.


Posco has an annual hydrogen production capacity of 7,000 tons, mostly using natural gas and byproducts from its power plants, supplying hydrogen to its steel factories.


“We will take the lead in producing hydrogen, which is a major clean energy in the future,” said CEO Choi Jeong-woo, whose term will end in March next year.


He is expected to be reappointed for the top post as he is now the only candidate recommended by Posco’s nomination committee.


The move goes hand in hand with the unit’s new green initiative, announced last Friday, to reduce its carbon emission to net-zero by 2050, becoming the first steelmaker in Asia to make the pledge.


The company also vowed to develop technologies for green hydrogen, produced by using renewable energy to split water, to get closer to zero-emission goals, setting a target of two million tons of annual production of green hydrogen by 2040.


The demand for hydrogen is expected to rise from 1.94 million tons in 2030 to 5.26 million tons in 2040, as more industry players are seeking ways to reduce their carbon emissions under tighter environmental regulations, the company said.


The company's business strategy is in line with the government's move to reduce carbon emissions to zero by 2050 in an effort to transform the country's fossil-fuel reliant economy into an eco-friendly one.


Posco is not alone in betting big on hydrogen.


SK Holdings earlier this month said that it has established a business unit dedicated to hydrogen-related investment and plans to start mass-producing liquefied hydrogen from 2023.