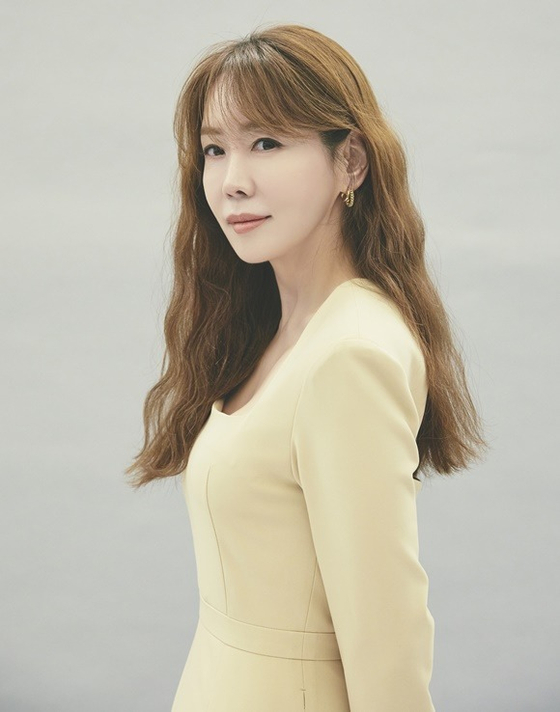 
Actor Kim Jung-eun's first foray back onto the entertainment scene in three years was in recently ended drama series "My Dangerous Wife.”

She took on the role of Jae-gyeong, a wife that initially comes across as a dangerous character with devious plans to take revenge against her cheating husband. The drama, which depicts what’s important to make a marriage work, ends on a positive note with the couple reconnected. Jae-gyeong's husband was played by actor Choi Won-young.

The actor, who lives in Hong Kong with her husband, came to Korea in March to start filming from mid-May, and lived as Jae-gyeong for seven months.

“There is always this kind of loneliness and emptiness an actor feels after each work is done, but I’m acting my best as if I’m not one of them,” said Kim, during an interview with Ilgan Sports, an affiliate of the Korea JoongAng Daily.

Below are edited excerpts from an interview in which she shared how she felt about the drama, and how it has been working in the entertainment scene over the past 25 years.

What made you want to be part of this drama?


The most attractive factor was that my character, Jae-gyeong, approaches everything with a very detailed plan. It was a rare chance to play such a character. Because this strong character was supposed to look very mundane and weak from the outside, her true colors really gave me a feeling of some kind of ecstasy. How much wives sacrifice in their real lives for their husband and children! I don’t know if such sacrifice is valued enough. I just like the drama's message of “Don’t look down on an ordinary housewife.”

What aspect of the character did you focus on most?
Of all the characters, mine was the most like one from a fantasy. She manages her own wealth while supporting her husband, and later even works on a plot for taking revenge on her husband for cheating on her. And she continues to create plans to make things work out. Could there be a wife like her in real life? So I thought I needed to focus on making her more real. I wanted to show all the details of how she went through changes after she caught her husband cheating.

What was the best scene in the drama for you?
I like the scene in the fourth episode where I fight with actor Choi over a poisoned glass of wine and then fall down the stairs and start bleeding. Also some of the fake kidnapping scenes gave me some catharsis. The character I played didn't have the luxury of having comical elements in her life at first. Later in the drama, she gained that a little and I was able to do some comical scenes with Choi. I was jealous when Choi got to play his character in a fun way and do many impromptu lines and acts.

What has changed in your life since you got married?
Before I got married, I really only needed to think about myself. So when I worked, I had nothing else to worry about other than the life of my character. But after I got married, I now have a life as a wife, and my husband’s life and work is as important as my life and my work. My husband was my biggest supporter as we had to be away from each other for about five months. Whenever there were scenes making me think about a married couple in the drama, I started to think about a lot of things. I missed my husband more than ever after I got back home from filming and really realized how precious it is to have him in my life.

Do you think you have improved as an actor after filming the series?
I was happy to act in a story that tell stories about marriage and married couples. I think single people around me don’t know much about what it means to “keep the marriage going.” I think it might be difficult for me to act as a character who is single (laughs). I might have to walk down memory lane.

It’s been 25 years since you debuted. How do you assess your career?
It is meaningful. The story won’t be anything grandiose to be shown in my biography, but every moment I experienced as an actor are all so special, and there are so many things I am thankful for. I believe traces of how one has lived remain all over one’s face, body and behaviors. For the next 25 years, I want to pray a lot and live well. I want to be an amazing adult.

Do you have any wishes for the New Year?
One. I want the coronavirus to disappear. Because of the virus, so many things are changing in such a short amount of time. Right before I started filming, I was giving a class at a school. Since in-person classes were not possible, I did it over Zoom. It was nonsense. How can you do an acting class without any human contact? It was really difficult.

How would you like to be thought of?
Many would call me actor Kim Jung-eun. I am just happy that I got a lot of compliments that I don’t deserve. Even when I act like I’m not excited, I smile when I hear that my acting is superb. I never thought I was good at acting, so whenever I hear such words, I just wear a very natural smile on my face.

Any plans for the future?
Nothing is set for now. If there’s good work, I’ll do it. If there isn’t, maybe I’ll go to Hong Kong with my husband. If anyone needs me please do contact me, but 14 days in advance. I need to quarantine myself!

Korea Drama Festival returns to Jinju for first time since 2019