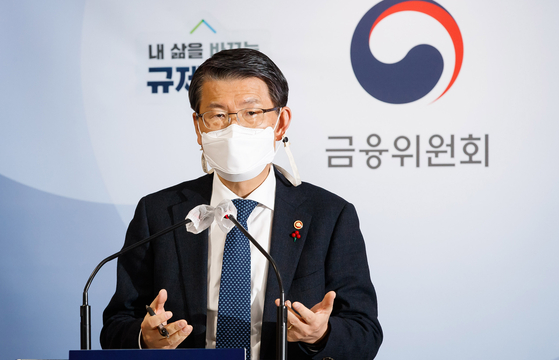 
The nation’s top financial policymaker hinted that he could give conditional approval for retail investors to short sell after demands for leveling a playing field dominated by foreign and institutional investors.

“We could start by allowing expert [retail] investors who can handle the responsibility [for short selling] and then expand it [to other retail investors],” Financial Services Commission Chairman Eun Sung-soo said Monday in a video press conference.

Eun made clear he is not too thrilled about retail investors short selling.

“There have been demands [for the government] to allow [short selling], which has been an uneven playing field, while on one side there has been opposition arguing more damage would result by allowing those with no experience to participate,” Eun said. “Honestly, I wish retail investors would not [participate in short selling].”

However, Eun said that in the interest of compromise, the best option is to limit the practice to those with expertise, such as investors in private equity funds with experience of managing at least 300 million won ($275,000) in investments.

Short selling is when an investor borrows stock and sells that stock immediately in the hope of buying it back later at a lower price, repaying the loan and profiting from the difference. It has been banned since March after it was cited as a key factor that drove down the local stock market.

The ban on short selling was to be lifted in September but was extended until next March.

Before the ban, short selling was a favored practice of foreign and institutional investors, who have the financial banking to easily borrow stock.

During the press conference, the FSC chairman said the government will soon be reviewing winding down some aggressive measures that were implemented earlier this year to help businesses in the wake of the pandemic, including extending loan maturities and suspending interest payments.

But with Covid-19 still raging, that may take a while.

“I believe the biggest issue next year will [still] be overcoming Covid-19,” Eun said. “There should be harmony on three fronts — smooth financial support in vulnerable areas, managing financial risks that grew in the process and a soft-landing [or winding down] of the expansionary financial policies.”

He said the government will look into “soft-landing” measures by canvassing opinions from financial and industry experts in January.

He expressed concerns over the resurgence of Covid-19 cases in recent weeks.

The government's loan maturity extension program ends in March 2021, when borrowers will have to start paying back their loans.

Despite the government raising of social distancing measures in the greater Seoul area, there have been little signs of infections subsiding.

On Saturday the daily confirmed cases reached a new peak of 1,030.

If the situation doesn’t turn around, many businesses with loan payments coming due are expected to face problems.

“We were hoping for an early end of the coronavirus,” Eun said. “But with Covid-19 spreading, it is difficult for [the government] to say when the situation will end and when we will execute our financial policies.

“We’re not sure if we will end the loan maturity extension and suspension after a year or extend this program,” Eun continued.

The FSC chairman stressed that the government will not immediately end its financial support programs, including the extended loan maturity, immediately.


“We won’t normalize it immediately the day after, but implement it gradually as a soft-landing is needed with time,” Eun said.

“But what I could say is we are doing our best to take pre-emptive steps against [insolvency] risks including advising financial companies to stack up bad debt reserves.”