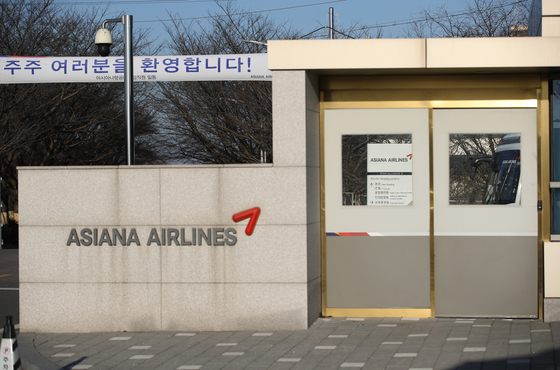 Asiana Airlines headquarters in Gangseo District, western Seoul, on Monday morning. Shareholders voted to reduce the capital of the airline at an extraordinary meeting. [YONHAP]


Shareholders of troubled Asiana Airlines voted in favor of the company reducing its capital at an extraordinary meeting held Monday.


The vote comes in the midst of a controversial government-funded takeover of the carrier by Korean Air Lines.

Under the approved plan, shareholders will receive one share for each three they own without any compensation for the exchange. The number of Asiana Airlines shares will be reduced to 74.41 million from 223.24 million on Dec. 28, while the company’s capital will be reduced to 372.1 billion won ($340.9 million) from 1.12 trillion won.

Shares of the troubled carrier plunged on the news, dropping 10.96 percent to 4,470 won, and the company’s market capitalization ended the day under 1 trillion won.

At the meeting held in the airline’s headquarters in Gangseo District, western Seoul, on Monday morning, votes were cast for 41.8 percent of the shares, and the resolution passed with 96.1 percent of those voting in favor of the resolution.

Kumho Petrochemical, the second largest shareholder of the cash-strapped airline with 11.02 percent of the stock, did not vote.

Asiana Airlines, which has been struggling for a number of years, suffered greatly with the drop in air travel during the pandemic and has been unable to stabilize its operations. After one failed takeover attempt, Korean Air Lines has come in with government help to rescue the carrier.

The airline is currently rated BBB- and carries a huge debt burden.

In the third quarter, sales for the airline dropped 53.2 percent on year to 731.1 billion won, but Asiana Airlines reported 5.8 billion won in operating profit and 2.3 billion won in net profit during the same period.