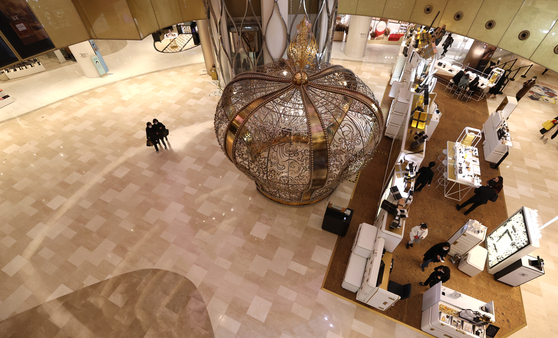 An almost empty shopping mall in Seoul on Dec. 9. Fewer people are shopping at malls following the recent resurgence of Covid-19 cases, in which the social distancing restrictions were raised to Level 2.5 in Seoul and metropolitan areas on Dec. 8. [YONHAP]


Level 3 has not been announced, but retailers are getting ahead of the curve and preparing for the worst.

The highest social distancing level has been mentioned by the government, though no commitment has been made to its implementation. Should it be put into place, retail life as we know it could come to an end.

Under the current Level 2.5 social distancing restrictions in greater Seoul — on a five-level system from 1 to 3 — department stores and discount marts sized 300 square meters (3,229 square feet) or above have to close at 9 p.m. Under Level 3, department stores will have to close entirely, while discount marts and convenience stores will be allowed to continue operating stores. Specific guidelines will be announced should the level be raised.

Retailers are planning to strengthen online sales channels in case offline stores are forced to be shut down.

Stricter regulations could be fatal for the already challenged retailers, especially at this time of the year, as December is one of the most lucrative months for retailers.

“Year-end sales, like during the Christmas season, determine an annual performance,” said a spokesperson for a department store. “Sales were already affected under the stricter social distancing level. If we’re forced to shut down under Level 3, our sales [will be hit hard] and we won’t be able to properly devise plans for next year.”

Another spokesperson for the industry said, “If social distancing is raised to Level 3, it is like slapping the face of someone who is already crying.”

Kang Jun-mo, a spokesperson for Hyundai Department Store, said, “We’re reviewing plans to expand live commerce and online promotions” in case of Level 3. Online sales of the department store accounts for around 15 percent of the total. “Whether the level climbs or not, consumer sentiment has withered under Level 2.5.”

“We’re anxiously waiting for the government’s specific guideline for Level 3 social distancing, which hasn’t yet been announced,” said a spokesperson for a major discount mart. “While some say major discount mart stores should be given an exception [to keep the stores open] since they are an essential for living, it could cause a balloon effect [of gathering crowds], which could ultimately raise safety concerns.”

Amid the concerns, convenience stores and e-commerce are enjoying a rush of traffic.

Compared to the previous week, sales of meal products at CU convenience stores in Seoul jumped 40 percent from 9 p.m. through 9 a.m. on Dec. 5 and 6. Sales by e-commerce operator Market Kurly rose 14 percent during the same period. Sales of food ingredients at SSG.com jumped 60 percent on Dec. 5 and 6 compared to the same week last month.

A spokesperson for SSG.com, however, said that panic buying isn’t as serious as it was in February, when people actually started to feel concerned about the pandemic. “In February, reservations for delivery from our platform were entirely booked up, and people had to wait more than five days to receive a package. These days, they can make reservation to receive a package the next day,” said Ahn Chang-hyeon from SSG.com.