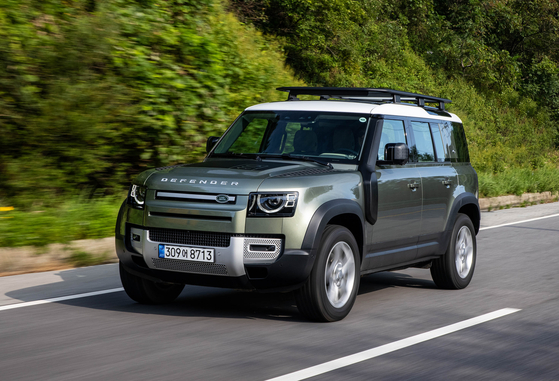 
Land Rover’s Defender SUV, an iconic British offroader with a 70-year history, has been reinvented for the 21st Century with all the high-tech gadgets and comfortable features that the modern driver looks for, but with the same rough-and-ready feel.

The ex-military vehicle came to Korea for the first time in September, riding on a camping boom here which got an extra boost from the coronavirus-driven travel ban.


The Korea JoongAng Daily got behind the wheel of the Defender 110 D240 SE trim this weekend on a 65-kilometer (40-mile) route to Chuncheon, Gangwon.

The first impression of the vehicle is its size — for a car that's classified as a midsize SUV, the Defender is big. The body frame is bigger than its rivals in the segment, its wheels are massive and even its steering wheel is one of the biggest the reporter has ever got her hands on.

Compared to the midsize Mercedes-Benz GLC SUV, it's 400 millimeters (15.7 inches) longer, 96 millimeters wider and more than 300 millimeters higher. The Defender 110 boasts a wheelbase of 3,022 millimeters.


When comparing to the Mercedes' G-Class, the automaker's flagship offroader, the Defender is still 138 millimeters longer. 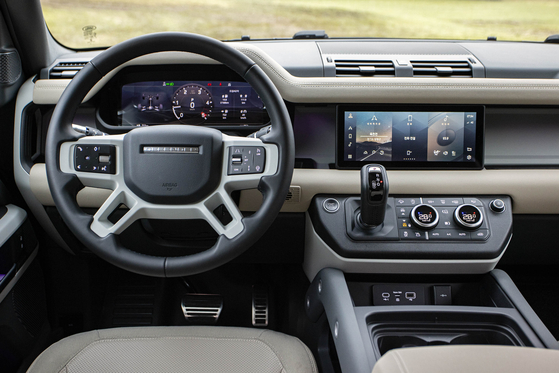 The interior of the Land Rover Defender 110. [LAND ROVER KOREA]


The interior space, unsurprisingly, is massive.

The front passenger seat is big enough for anybody to feel comfortable, with the entire interior space feeling more like a small room than a large car. A shelf runs the length of the front of the car, perhaps in reference to the Defender's old-school pedigree, providing a huge amount of organizational space for everything from smartphones to coffee cups and even books.


Despite its off-road credentials, the Defender is well prepared for modern roads with an impressive advanced driving assistance system.

Parking, which is usually the biggest concern for such big cars, was actually pretty easy with the help of six cameras, 12 ultrasonic sensors and four radar systems that provided a detailed surround view of the car when reversing as well as very sensitive warning sounds.

The vehicle is topped with a 2.0-liter (0.5-gallon) 4-cylinder diesel engine that is able to generate a maximum of 240 horsepower and 43.9 kilogram-meter torque. 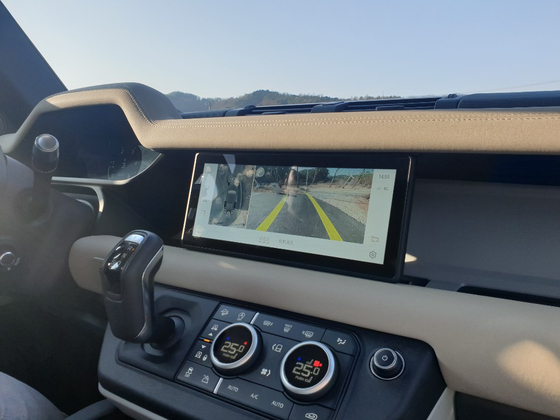 The infotainment screen shows detailed rear and surround view when on a rear gear. [JIN EUN-SOO]


The engine might not sound powerful enough for such a big car, but on the road it certainly doesn't lack strength. Acceleration was smooth up to speeds of 150 kilometers per hour, and despite its size and rectangular shape, cornering was smooth.

One of the biggest merits of this Defender is its navigation system, which comes topped with SK Telecom’s T Map.

While most imported carmaker’s navigation systems are unreliable and drivers are forced to rely on smartphone apps instead, this car doesn't have that problem.


The navigation screen also appears on the digital cluster behind the steering wheel, making it even easier to find your way.

The back seat is as comfortable and spacious as the front row, with nearly 1 meter (3 feet) of leg room and no rise in the middle, as is normally the case for internal combustion engine cars.

Heated seats are also available in the back, and there are four USB ports for charging electronic devices.

There are already two ports available in the front row as well.

The Defender has 1,075 liters of luggage room, which rises to 2,380 liters when the second row is folded down.

From practicality to all-around driving capabilities with advanced driving technology, the car seems too good to be true, except for one thing: The price. 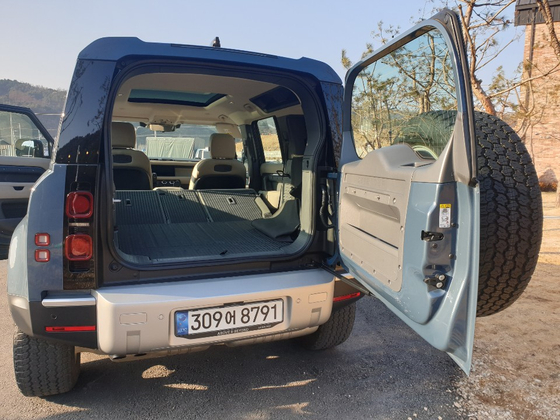 The vehicle offers 2,380 liters (630 gallons) of luggage space when the back seat is folded. [JIN EUN-SOO]