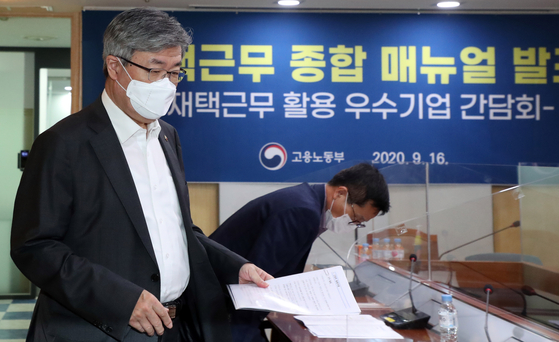 Labor Minister Lee Jae-kap enters an office inside the Labor Ministry building in Jung District, central Seoul, to speak at a meeting for the ministry’s remote work manual in September. During the virtual meeting, the ministry announced the recommended protocol for implementing remote work at businesses and discussed with companies that have been successful with remote work. [NEWS 1]


Remote work is here to stay, even after the pandemic ends, while the structure of our metropolitan areas could change permanently with the drop in demand for office space, the central bank predicts.

The bank released a report on remote work and the pandemic on Sunday. As it was published by the research department, the conclusions are not policy statements and may not reflect the opinions of officials setting interest rates.

According to the report, the perception of working from home has improved globally, as more people have been forced out of their offices by the pandemic. The amount of time and resources spent on creating remote working systems was cited as another factor working in favor of a long-term change.

“Just as the demand for e-commerce has risen for consumption and virtual conferences have become more common corporate activities, remote working will rise even after the coronavirus pandemic lets up,” the report said.

The central bank’s outlook states that there will be a hybrid form of working, involving a flexible use of home and the office.

It also discussed the possibility of remote work’s impact on commercial space and population movement when remote working becomes established in the country.

“The spread of remote working may have a limited impact on the decrease in demand for commercial buildings in metropolitan areas,” said the central bank in a press release with the report. “Employees may move to more affordable residential areas because there is now a smaller need to live near their workplaces.”

The bank qualified the projection on the change in city population by saying that there are other reasons for living in metropolitan regions, and hence the population movement into the suburbs may not spike immediately.

In terms of the strengths of remote work, the central bank said the elimination of commutes and an increase in mental focus can contribute to an increase in productivity. Corporations can reduce human resource costs after implementing remote work, although concerns remain around slacking off, which can in turn increase costs. The lack of in-person communication between workers can cause problems in creativity and circulation of work-related information, according to bank.

Perceptions that the shortage of conversations and collaboration can lead to reduced creativity have limited the widespread implementation of remote work. While employees worry that remote work will put them at a disadvantage in terms of evaluations, managers are concerned about the loss of sense of belonging, which may negatively impact performance.

“For countries with long average working hours and strong IT foundations, the expansion in remote work can benefit their productivity,” the bank wrote.

Korea is one of the countries that may benefit from the expansion in remote work, as around half of the population lives in Seoul, and most of them commute to work in the city.

The bank said it is premature to make universal conclusions about whether telecommuting will improve or worsen the quality of life for employees, since the studies that show the positive effects of remote work may be biased — companies that widely implement remote work policies tend to be high-performing. The effectiveness of remote work may be affected by the work’s characteristics and workplace cultures.

In order to ensure that remote work contributes to the improved quality of life for workers, the bank said employees must make firm distinctions between spaces for living and work within homes, and child care services and schools must become normalized first.

“As more and more corporations expand the types of tasks that can be done remotely, they will be closer to discovering optimal proportions for working from home and in the office,” said a spokesperson for the central bank. “During the process, a culture that prioritizes performance rather than the length of work will be established.”