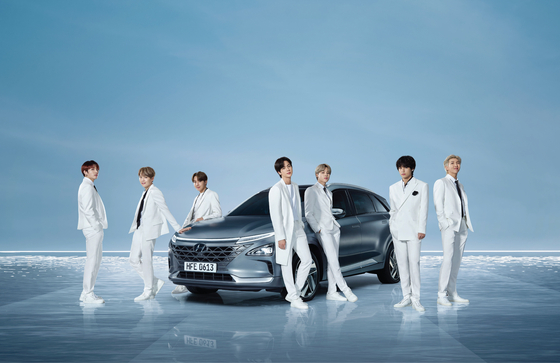 
Seven out of 10 hydrogen-powered vehicles sold from January to September this year were from Hyundai Motor, according a local research and energy consulting firm Monday.

A total of 6,664 hydrogen electric vehicles were sold worldwide during the period, and 73.8 percent of those were from Hyundai Motor, SNE Research said in a release. The Korean carmaker sold 4,917 hydrogen cars, a 61.3 percent year-on-year jump.

The report was produced independently by SNE and was not commissioned by the manufacturer.

Hyundai Motor had a 44.3 percent market share during the same period last year.

The company’s Nexo model led the sales, with 3,048 units sold during the January-to-September period, a 61.1 percent year-on-year jump.

According to Hyundai Motor, 6,318 Nexos were sold this year as of last month, 865 of which were sold domestically and 5,453 exported. Certain 2019 and 2020 Nexos are currently being recalled for problems with the braking software. 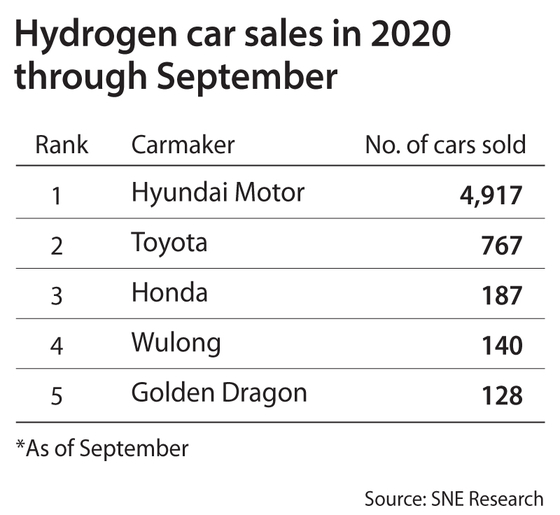 Toyota came in second, accounting for 11.5 percent of the new hydrogen cars sold during the cited period. It sold 767 units, which is 61.8 percent less than the same period last year.

Sales of Toyota Mirai’s first generation dwindled ahead of a new generation introduction. The company has reduced production in the United States this year due to a partial shutdown of its factory for Covid-19.

Mirai introduced the revamped version last week in Japan and will release the model in the United States later this month at the earliest.

“Hyundai Motor and Toyota will compete fiercely in the hydrogen vehicle market next year and the market size will expand as well,” SNE said.

Chinese hydrogen carmakers Wulong and Golden Dragon made the rankings for the first time this year, coming in fourth and fifth with 140 and 128 units sold, respectively, during the January-to-September period.

Globally, the number of hydrogen cars this year as of September was 6,664, a 3.2 percent year-on-year drop.

In the third quarter, 2,594 hydrogen cars were sold globally, which is a 27.2 percent year-on-year jump.