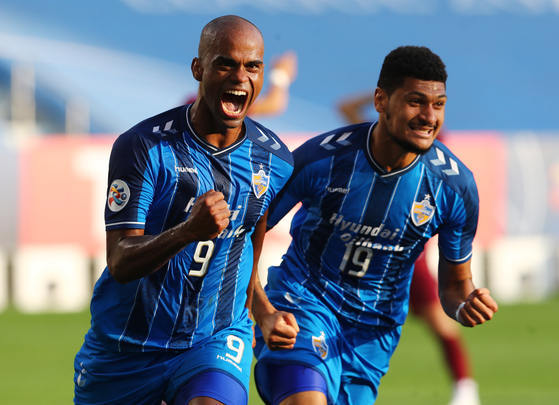 Junior Negao, left, celebrates with Bjorn Johnsen after scoring the winning goal for Ulsan Hyundai FC against Vissel Kobe in the AFC Champions League semifinal in Qatar on Sunday. [REUTERS/YONHAP]

After a quiet first half, Vissel Kobe were the first to break the silence at Jassim Bin Hamad Stadium in Doha, Qatar, on Sunday night, scoring the opening in the first few minutes of the second half.

Staying 1-0 down for most of the second half, Ulsan struggled to create chances. Despite entering the semifinal contest with a better tournament record and a easier route to the match than Kobe, who had to play all the way to penalties during their quarterfinal match against Suwon Samsung Bluewings on Thursday, it looked like Ulsan was going to go out to the Japanese side.

It wasn't until the 81st minute that Ulsan finally tied the score. Striker Bjorn Johnsen, substituted on in the 55th minute, found the back of the net, but the goal was originally ruled offside. VAR came to Ulsan's rescue, finding no fault with the play. Both teams went on the offensive in the final few minutes of the game, but neither side's defense was willing to give in and regular time ended with the score tied at 1-1.

The score remained tied throughout 29 minutes of extra time, almost forcing Kobe to face a penalty shootout for the second game in the row. In the end Ulsan were able to get the job done with a minute still to play, although it did come down to a single penalty.

Awarded a penalty in the 119th minute, Ulsan's star player Junior Negrao stepped up to the spot and slotted the ball to the right of Kobe goalkeeper Daiya Maekawa. With that, Ulsan won the game 2-1 and a ticket to the AFC Champions League final.

Ulsan will now advance to face Persepolis FC of Iran in the final on Dec. 19.

This year’s AFC Champions League was interrupted by the outbreak of the Covid-19 pandemic. The contest started in February, but the schedule was put on hold after just a few games.

Groups A, B, C and D resumed play in September, completing their group stages and going on to play a split knockout round. As a result, Persepolis has been waiting since Oct. 4 to find out who it will face in the final.

Groups E, F, G and H, which included all Korean teams, resumed play in late November. Four Korean sides competed in the group stage, with FC Seoul and Jeonbuk Hyundai Motors FC failing to advance any further. Suwon made it to the quarterfinals, where it lost to Vissel Kobe on penalties.

This year's AFC Champions League final will be Ulsan's second — they won the tournament in 2012, defeating Al-Ahli of Saudi Arabia 3–0.

Champions League glory is also a good shot at redemption for a side that has struggled to pick up trophies in domestic contests recently. Ulsan finished second in the K League 1 in both the 2020 and 2019 seasons, and lost the FA Cup final to Jeonbuk in November.

Ulsan and Persepolis will face each other at Al Wakrah Sports Complex in Al Wakrah, Qatar, on Saturday at 9 p.m. Korean time.