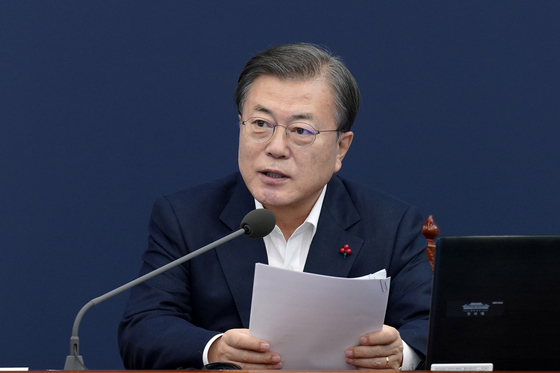 President Moon presides over a meeting with top aides at the Blue House on Monday afternoon. During the meeting, Moon discussed economic measures, such as provision of more than 1 million jobs for the lower income classes and support for the self-employed businesses, as well as the general state of the economy. [NEWS 1]


President Moon Jae-in’s suggestion Monday that landlords take a haircut on rents to help small businesses inspired a hail of criticism from many quarters, with academics and politicians saying that this sort of generosity with other people’s money could violate property rights.

“The question of fairness for self-employed business owners who are burdened with both a dramatic decline in sales from adhering to the government’s Covid-19 control and prevention measures and rents weighs heavy on my heart,” Moon said.

"Financial support to expand the 'good landlords movement' is necessary. I hope there will be efforts to implement a tax system to ease the financial difficulties during the coronavirus pandemic and expansion in financial support."

“During a national emergency, society as a whole must share the weight of the distress instead of forcing the sacrifice to be made solely by the marginalized population, and there needs to be a combined effort to brainstorm various measures that will strengthen the responsibility and role of the government."

Rent is a private matter between a landlord and a tenant, but the government intervened due to the pandemic. As the president’s use of the word “good” implies, the government makes it a tale of good versus evil — the landlords that reduce rents as the former and those that do not the latter. The government has rewarded landlords that participated in the “good landlord movement” with a tax credit of 50 percent of the reduction in rent.

The ruling party has been preparing for relevant legislation.

Democratic Party (DP) lawmaker Lee Dong-ju announced on Facebook that he will file a motion for an amendment to the Commercial Building Lease Protection Act on Sunday. The proposed bill that Lee submitted to the National Assembly will prohibit landlords from charging rents for businesses subject to the congregation ban, and limit the rent to below 50 percent of the original price for businesses that are subjected to congregation restrictions.

Concerns about the measures have been raised by the experts.

“Recently, there has been a rise in the number of vacancies in buildings,” said Sung Tae-yoon, an economics professor at Yonsei University during a phone call with the JoongAng Ilbo. “It is better for the government to directly support self-employed business owners that are actually struggling to cover the rents.”

“One can call donation a ‘good act,’ but to call it a ‘fair act’ seems to be coercive,” Sung said regarding the comment President Moon made about fairness.

“There is no problem with landlords with the financial means to voluntarily reduce rent, but the government’s action of limiting or banning rent is a fundamental infringement of property rights,” said Chang Young-soo, a constitutional law professor at Korea University School of Law.

In terms of the bill that Lee proposed, Chang said there is enough for it to be declared unconstitutional.

“The resurgence of the coronavirus spread has been breeding fury among the self-employed, and it is the government’s attempt to pass the responsibility to the leaseholders,” said Jang Sung-chul, the chief of a local policy institute.

The opposition party added to the critical voices.

“Is the president silently pressuring the property owners not to receive rental payments?” said People Power Party (PPP) spokesman Bae Joon-young. “During the time when everyone needs to concentrate their powers in overcoming the difficulty, Moon’s statement again divides the landlords and tenants.”

“The purpose of President Moon’s statement is to call for further measures, instead of stopping at supporting the ‘good landlord movement,’ as everyone must do their part,” said a senior official at the Blue House.