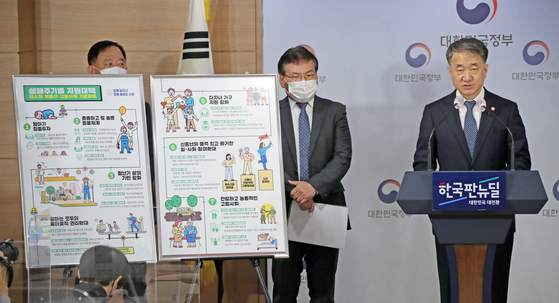 A cabinet meeting headed by President Moon Jae-in Tuesday signed off on yet another set of measures meant to counter the country's falling birthrate and aging population.

Each parent will receive 100 percent of his or her monthly wage with a cap of 3 million won if both take parental leaves for three months.

If only one takes a leave, he or she will get 80 percent of the monthly wage with a cap of 1.5 million won.

This program is limited to families with children under 12 months.

Parents who take parental leaves of four to 12 months will only get 80 percent of their monthly wage with a cap of 1.5 million won.

This is an increase from the current payments.

Parents who take leaves for having a second child gets 100 percent of their monthly wages. However, the cap is 2.5 million won for under three months.

Parents who take leaves of four to 12 months will only receive 50 percent of their wages with a cap set at 1.2 million won.

To ease the cost to companies, the government will expand its employment stabilization subsidies.

Eligible companies currently receive 300,000 won a month subsidies for each employee that takes a leave. That payment will be raised to 2 million won for a period of up to three months.

Additionally, the government will offer 30 percent tax credits for labor costs for small- and medium-sized enterprises (SMEs) when they keep employees for at least a year after they return from six-month child care leaves.

The tax credit will be lowered to 15 percent for companies that are bigger than SMEs.

The tax credits currently in place for SMEs is 10 percent. It is 5 percent for larger companies.

The government also said it will give scholarships for school tuitions of lower-income households starting from their third child.

The government said it will build 550 state-run day care centers every year, raising the ratio of public day care to 50 percent within the next five years.

On Facebook, Finance Minister Hong Nam-ki stressed that the government will spend 196 trillion won on tackling the population crisis by 2025 starting with 36 trillion won that will be used next year.

“Our fertility rate [as of 2019] is the lowest in the world at 0.92,” Hong said on Facebook. “It’s been projected that starting this year our population will shrink and that the working age population [between 15 and 64], which have a major influence on our economy, will be 230,000 fewer next year.”

According to a study by the Bank of Korea in 2017, average annual growth of the Korean economy with the current rate of population decline will slow to 0.4 percent between 2026 and 2035, a significant drop from 3.9 percent averaged between 2000 and 2015 and 1.9 percent projected average growth between 2016 and 2025.

It noted that the demographic changes will not only lower supply and productivity but also affect consumer spending and investment.

“A national investment with the strong will to counter the low birthrate and aging society is needed,” said outgoing Health and Welfare Minister Park Neung-hoo in a press briefing on Tuesday.