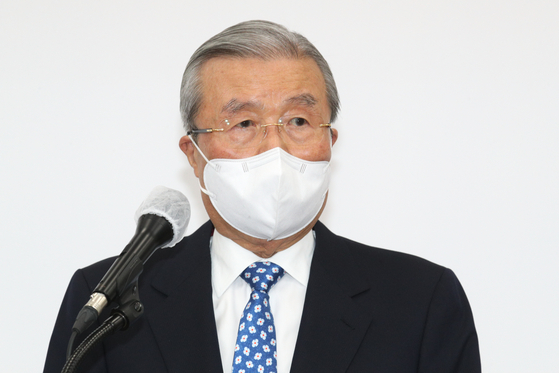 Kim Chong-in, acting leader of the People Power Party, holds a press conference at the National Assembly to issue a public apology for the two former presidents' corruption scandals that led to their imprisonment. [YONHAP]

“The National Assembly approved the motion to impeach Park on Dec. 9, 2016,” Kim Chong-in, acting leader of the PPP, said in a press conference held at the National Assembly. “Four years later, two former presidents remain imprisoned. Today, I am offering an apology to the people for what happened.”

It’s the first time a conservative party leader has apologized for the scandals. Lee, who was president from 2008 to 2013, was succeeded by Park.

Lee and Park were investigated and indicted after President Moon Jae-in launched a campaign to “eradicate accumulated evils.”

The Supreme Court convicted Lee of embezzlement and taking bribes from a conglomerate and sentenced him to 17 years in prison in October. Park, who was impeached in 2016 and ultimately removed from office, was convicted of corruption and abuse of power, and most recently was sentenced to 20 years in prison. That sentence has been appealed by the prosecution, however.

Kim, who has been leading the largest opposition party since the April general elections, said he is offering a heartfelt apology to the people because the party failed to keep Lee and Park in check during their terms.

He also apologized that the party failed to discover or prevent the wrongdoings committed by the presidents and their associates.

Kim said Lee and Park were particularly guilty of forming cozy relations with business tycoons. He also apologized for Park allowing her confidant, Choi Soon-sil, to intervene in state affairs despite holding no public office.

Even after the unprecedented impeachment of Park, the party still failed to reflect upon itself, Kim admitted. “We apologize for disappointing the people with our same, old attitudes,” he said.

In his apology, Kim also criticized the Moon administration and the ruling Democratic Party (DP).

“We should have worked hard to advance our politics after the impeachment, but democracy and rule of law have actually regressed now,” Kim said. “We share responsibility for the current political situation and we offer an apology.”

“When we look back on our history, all presidents had tragic endings,” Kim said. “One went into exile in a foreign country and another was assassinated by a confidant. There were former presidents who stood trial with ropes around their hands, whose families ended up in prison or who made an extreme choice [of committing suicide]. None of our presidents had a proper ending.”

Kim said the people have punished the party through recent elections, and the party will humbly accept the voters’ criticism. He promised that the party will work hard to improve the people’s livelihoods and recover the economy. He also vowed to rebuild the party from square one by replacing old members with new politicians.

“I know this apology cannot resolve all resentments, but I am offering a sincere apology again,” Kim said. “We have committed a serious crime before history and the people. We seek the people’s forgiveness.”

The apology was a part of Kim’s key project to reinvent the party before next year’s Seoul and Busan mayoral by-elections. Ever since he took charge of the PPP, Kim has said he wants the party for formally issue an apology for the two former presidents’ wrongdoings in order to bid farewell to the past and start a new political future.

Kim was originally scheduled to issue the apology on the fourth anniversary of Park’s impeachment by the National Assembly on Dec. 9, but delayed the timing as the PPP lawmakers filibustered controversial bills in the legislature last week.

“There is no need for us to brand ourselves with a stigma,” said  Rep. Joo Ho-young, the floor leader.

According to PPP sources, Kim recently showed the draft of the apology to Joo to persuade him that the message was not to criticize Lee and Park, but to reinvent the party’s image before the upcoming by-elections. Joo reportedly approved the message and persuaded skeptics to support it.

Kim was rumored to be issuing the apology as part of a campaign to urge Moon to issue special pardons to the former presidents. Only Lee is currently eligible for the pardon since his trial is over.

The DP said it respects the PPP’s apology.

“We hope their actions will match their words,” said Rep. Shin Yeong-dae, spokesman of the DP.

“It is inappropriate for the Blue House to comment on the opposition acting head’s apology,” a presidential aide said.