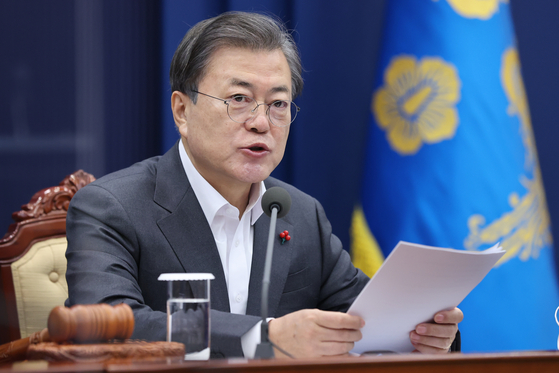 
President Moon Jae-in on Tuesday expressed hope that the new investigation agency for high-ranking public officials will serve as an effective check on the power of state prosecutors.

Moon made the remarks by videoconference during a cabinet meeting, in which he celebrated the recent passage of a package of legislation to reform Korea’s powerful state agencies.

The ruling Democratic Party (DP) and its allies last week passed a bill to neutralize the main opposition People Power Party’s (PPP) veto power in the process of appointing the head of the Corruption Investigation Office (CIO), effectively lifting the obstacle for the office’s delayed launch. Two other bills to reform the National Intelligence Service and the National Police Agency were also passed by the ruling party, despite the opposition’s protests.

“The institutional reform of the powerful state agencies, a long-cherished wish of Korea’s democracy, is finally completed,” Moon said. “It is a historic development for the people, who have suffered human rights violations and infringement on democracy by state agencies.”

Moon stressed that the CIO is extremely important as a “tool to democratically control the prosecution.”

Prosecutors had hitherto wielded unchecked powers, with no way to hold them accountable for wrongdoing, he added.

“Until now, we had no such system,” Moon said. “If the prosecution will be controlled democratically, based on the principles of checks and balances, it will be able to avoid criticism for wielding absolute power and restore the public’s trust.”

Moon stressed that the CIO’s manpower will be far outnumbered by the state prosecution service, which employs about 2,300 prosecutors.

“Even after the CIO’s launch, the prosecution’s power will be mighty,” he said. “The prosecution can protect justice in our society with its powers, but the people think it is necessary to keep the prosecution in check. I hope the prosecutors will accept this.”

The timing of Moon’s remarks was conspicuous, as his administration and the ruling Democratic Party (DP) are attempting to push out Prosecutor General Yoon Seok-youl in what is viewed as a war to weaken the prosecution’s powers. A disciplinary process against Yoon is currently ongoing, and the Justice Ministry held the second part of a hearing in that process on Tuesday.

The CIO has jurisdiction over 6,500 senior officials, including the president and his or her immediate relatives, as well as presidential aides, cabinet members, lawmakers, judges, governors, mayors, senior police officers and military officers.

But Moon particularly highlighted its role of investigating prosecutors.

In his remarks, Moon also claimed that the CIO, had it been launched earlier, could have prevented the corruption and abuse of power scandals of his predecessors.

Moon said the initiative to launch the CIO started in 1996 after the slush-fund scandals of Chun Doo Hwan and his successor, Roh Tae-woo.

“During the 2002 presidential election, Roh Moo-hyun made it a pledge and tried to pass a law to establish it when he was the president,” Moon said.

Moon said the launch of the CIO was his presidential pledge not only in the 2017 election but also in his first run in 2012.

“If the CIO had been established at the time, there would have been no abuse of powers by the Park Geun-hye administration,” he said.

Don’t bury heads in the sand