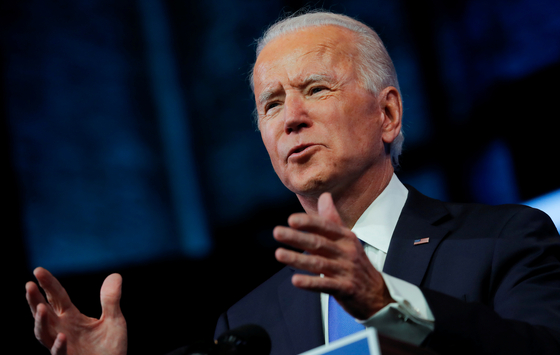 U.S. President-elect Joe Biden delivers a televised address to the nation after the U.S. Electoral College formally confirmed his victory over President Donald Trump in the 2020 U.S. presidential election, from Biden's transition headquarters at the Queen Theater in Wilmington, Delaware, on Monday. [REUTERS]

According to presidential spokesman Kang Min-seok, Moon congratulated Biden again for winning the most votes in U.S. history, and expressed his hope to cooperate with the new administration to strengthen the Korea-U.S. alliance, develop closer relations and promote denuclearization and permanent peace on the Korean Peninsula.

Moon also wrote to Biden that he will cooperate with the United States on other global issues, such as controlling the Covid-19 pandemic and efforts to fight climate change, according to Kang.

According to the Blue House, the letters were sent around 8 a.m. Tuesday. After Hawaii cast its four votes for Biden, he finished with 306 Electoral College votes, making official his victory in last month’s presidential election against President Donald Trump.