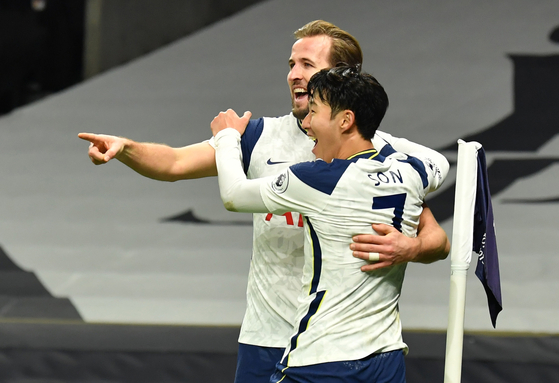 
Son Heung-min and Harry Kane of Tottenham Hotspur have now combined for 12 goals in the English Premier League (EPL) this season, making them the second-most prolific goal-scoring duo in a single season ever.

Son and Kane are just one goal behind the all-time single season goal-scoring partnership, England football legend Alan Shearer and Chris Sutton, who together produced 13 goals for Blackburn Rovers in the 1994 to 1995 season.

Barring injury or interruption, Son and Kane are almost guaranteed to break that record, quite possibly before the end of this year. Based on their performance so far, they'll likely take the record considerably further before the season ends in May next year.

Notably, the season that Shearer and Sutton first set that record was also the only time that Blackburn have ever won the EPL, a feat that Spurs is hoping to emulate this season.

Son and Kane's remarkable rise to the top is due both to their impressive chemistry, but also to Jose Mourinho's management style, which has clearly shifted the attacking focus of the team squarely on to Son and Kane's shoulders. Son, who was named the Korean Football Association's Player of the Year on Tuesday, has scored ten goals for Spurs this season, followed by Kane with nine. No other player on the squad has scored more than one.

The Son-Kane goal-making machine could go on to even greater things this season. The duo have now combined on 32 goals in total throughout their five years playing for Spurs together, making them the second-most prolific goal-scoring partnership of all time.

With 32 goals, Son and Kane are now only five goals away from overtaking the all-time top goal-scoring duo, Didier Drogba and Frank Lampard, who combined on 36 goals during their time playing for Chelsea.

On their route to the top, Son and Kane have already overtaken some of the biggest names in Premier League history.